Posted on September 22, 2013 by dharmeshkalyan

Day 3, plan for the day was Mall hopping!

Today we were better prepared, had a late breakfast at Delifrance – only 2 minutes walk from our Hotel – started the morning late since HK did not start till around 10:30.
First stop of the day was Granville Road – this street is full of outlet style shops and was the next block to our hotel.
Getting into the street, we were surprised to find all shops still closed at 10:30! Asked around and apparently it was a PUBLIC HOLIDAY today, which meant street shops would open at midday or after!!
Decided to head to the next Mall on my list – China City Mall. For some strange reason, we were seeing lots of people with Suitcases (small and large) coming in this centre – this place must cater to some serious shoppers!!
The mall did not seem to have many stores, but was packed with people with suitcases!! Headed to the next floor and only then realised the reason for the people with luggage – this was also the ferry terminal for international departures/arrivals to Macau and the near regions. This worked in our favour, we had not yet booked our Macau transfers and were quickly able to sort that out. Got 4 tickets on the turbojet – Hydrofoil ferry.
Macau transfers now sorted, we decided to head out on the streets to see the near by –  high street stores – Armani, Gucci and others ….. and whilst visiting these, we  some how ended up in another upmarket Mall – HongKong seems to have an abundant supply of Malls all intervened together!

After an hour of roaming around, it was time to head out – but wait, which way was the exit, this place was sooo big all we could see is Shops and cafes, no windows to see out to the streets. Found an information screen, click on it expecting a touchscreen map, however on the screen came a live feed of a Customer service person, we could directly ask her what we needed, she was interactively explaining the route to us using the map on the screen – very impressive……
Out on the streets again (was around 1 pm), it was lunch time calling, decided to do Woodlands Indian veg resturant, which was only 3 blocks from where we were. Walking to it, our ladies spotted a big ESPRIT store and headed there – bit difficult to keep ladies out of shops! Back on the streets again and this time we had to find a washroom – ladies were bursting!! Why!!
Saw a nice hotel near by and stepped in. Noticed a big YMCA sigh there and everywhere else in there. Very confused, the interior was 5 star and yet YMCA signage and memorabilia everywhere, damn we should have just stayed here, so central & 5 star plus YMCA would be cheap right? Turned out this was the old sight of the original YMCA building and have been converted to a luxury hotel retaining the YMCA heritage. 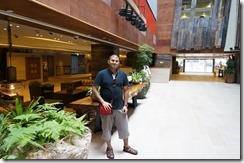 With the ladies relaxed now post washroom visit, time for the hopefully short walk to Woodlands. Outside temperatures were HOT and HUMID making things very uncomfortable, also we were walking on the main road near the harbour where taxis could not stop, attempted to hail a few with no luck. Decided to keep going , google maps was very helpful here.
Got to Woodlands, were sooo glad the place was nicely air-conditioned! The decor was not much at all, however they had lots of people there and the food looked good.
We ordered a Pani-Puri and 3 Thali’s and a Dosa special. The Pani-puri was soooo good another one had to be quickly ordered. All the meals turned out to be super excellent. All enjoyed thoroughly and were already trying to fit another visit here in the next day!

The walk back to our hotel was surprisingly quick, we were literally so close to this place, yet had not realised that. Quick drop-off bags at the hotel then off to Granville Street. Wow this place was busy!! Walking through the streets was slow, too many people and too many interesting stores keeping our ladies very intrigued!

By 5:30 Nita’s legs were getting too tired, off to the hotel, on the way I stopped by at a pharmacy to buy 4 masks the locals wore to filter out the smoke (I think) – this was going to be a joke between me and Jayesh.

At 7 we all met up again at the lobby and were off to see the Symphony of Lights on the HongKong Harbour – apparently the worlds biggest synchronised light and music show.

Got to the viewing area near the Starferry area Kowloon side and the place was already getting busy. The HongKong Island skyline looked great from here! 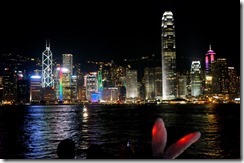 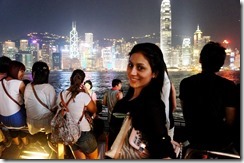 Show started at 8pm, and although it was good, I was expecting more, got us all a bit bored after about 2 minutes of it!! 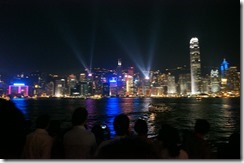 To make up for the lacklustre show, we decided to imitate locals and wear the face masks – (used to cover smog I think or hide the bad looks??)!! 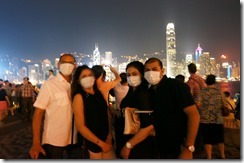 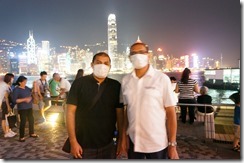 Next stop was the ladies market, again lots of walking, browsing thru all the small stalls and bargaining things down well below half the first called price. Half way thru, both Nita and my legs were totally buggered. luckily in HongKong there seems to be a never ending supply of foot massage places, informed Jayesh where we were and then we were in our well deserved foot massage and pedicure (apparently my skin was not soo good and needed one!!)

Jayesh Priya joined soon after, by this time, the place was packed with others, however everyone except for us were super quiet!! We were the loud ones and talking to the masseuse and cracking jokes. We had a good laugh and was great relaxation for the legs.

Out of there, in the CAB and of to Tsim Sha Shui East Centre – this place is great, has a row of pubs/restaurants overlooking the harbour. We ended up at an Aussie pub, Waterloomooloo. By this time, Nita was feeling much better with her legs recovered, she got into the Mud Slide Cocktails, I stuck to my regular – Carlsberg Beer!. Also had some pizzas, these were one of the best woodfires pizzas we have hard so far – simply amazing. 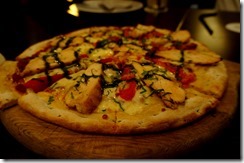 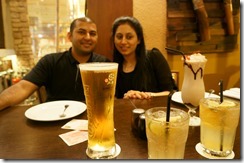 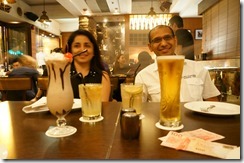 A great nite at the pub! We were already making plans to visit this place again and try a different PUB tomorrow……