Posted on December 12, 2011 by dharmeshkalyan

Another early morning rise. Our train to Delhi was @ 6:25 am, being the one for safety first, I wanted to be at the train station by 5:45 am at the latest. Did not want to take any risks.
Kids again had their showers the night prior – they were loving this! Were up at 4:30am, and down for breakfast @ 5.10am in the hotel’s coffee lounge (only realised the prior night, the lounge is open 24 hrs!!). Kids only had a partial breakfast – could be due to the early start!
Getting out of the hotel around 5:30am, I realised how cold Amritsar is at nights… however the ride to the station in the Auto was freezing, luckily all the girls had jackets on – myself I had thought a long sleeve t-shirt would be fine – how WRONG I was!

Reached train station on time, however finding the correct train was proving difficult, everyone I asked pointed in different directions, finally headed off to the Station Master’s office and what a smashing piece news I got – MY TRAIN WAS CANCELLED!!!, checked with another and it had been cancelled! Apparently this was done over a month ago – not sure how then it was booked just 2 weeks back!!
Asked the Deputy (or whoever that guy in black suit was), to please assist in someway (infact by then I was pleading!!), he took me around to the reservations counter, however I was with him behind the counter whilst a long queue waited on the otherside, knew there would be some extra’s I would need to offer, which I was more than happy to do so, as long as I got on a Train to Delhi! He was able to get us on the 7:10 train for 3000/rs in AC II Class, which was approx double the going rate, no problems atleast we were on a train. The funny bit was, whilst the queue was long on the otherside of the counter (only a SINGLE counter was open, so people were getting frustrated that I was there behind it!!), I was filling in my forms right there in full view of the other queued passengers (next to the counter attendant) and the attendant was processing my tickets before anyone elses …money does wonders, especially here, “MERA BHARAT MAHAAN”!!!

Had not realised that it was a sleeper AC class till we got in, which was good as it offered more room. The problem was we had two seats together and the other two were in different places. Strange but our cubicle was empty and with soo much space, Neha and Pooja made themselves comfortable – there were enjoying climbing up on the upper berths. 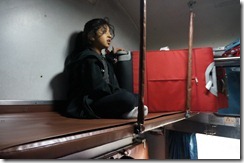 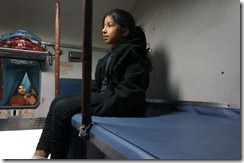 The train ride being so slow, I had lots of time to write up my blog for Days 8 & 9, although at times I felt like it was too much and needed to switch off for a while – possibly all to do with the mornings frustrations.
For most part Pooja and Nita slept, while Neha was finding sleep too boring! (well that was her complain)

We reached Nizamuddin station (Old Delhi) @ 3.15 pm, the train actually took less time than the one to Amritsar, but it felt longer.
Nizamuddin station was busy, very very busy. People were bumping and pushing each other on the platform crossways and stairs, a couple of times Pooja almost lost grip, had to hold her hard.

Taxi to Karol Bagh took almost 50 minutes, did not realise how far Nizamuddin station was – am glad I found out, will be using that on the way to Agra in a couple of days!

Back at the hotel, we all crashed and rested till around 6pm. After which we hit the Karol Bagh market area to do another round and find dinner. Dinner was at Punjab Sweet Corner, another great vegetarian restaurant (am really getting into the Veg stuff and loving it). Kids had their fav, Shahi Paneer (another name for Paneer Makhani, learning the proper names now!!). Nita and I ordered just CHATS and they were YUM. Thinking they would be very small, we ordered two of each, and could not finish it all. The stuffed “GOL GUPPAI” were simply amazing (Pani Puree with stuffing, and all the other floating yoghurt etc… sooooo yummy) 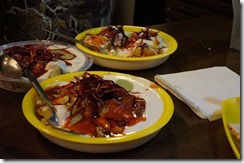 Back on the streets, we visited a couple of Shawl stores (Nita wanted some). Got into the one store, where we saw a really nice Shawl being viewed by a Seth’s wife, turned out the Shawl was worth 65,000/RS (NOT 6,500, it is 65,000), that’s for a Shawl, not a saree!! and she was getting a couple of these and not even blinking!! Amazing.
All the girls got shawls that night, including Neha & Pooja.

By 9:30 pm we were back at the hotel and sleeping, it had been a long day.

Have always loved travelling and will continue to pursue this love. Favourite Travel quotes: “Traveling – it leaves you speechless, then turns you into a storyteller.” – Ibn Battuta “The world is a book, and those who do not travel read only one page.” – Saint Augustine
View all posts by dharmeshkalyan →
This entry was posted in Amritsar, Delhi, India. Bookmark the permalink.