Posted on December 13, 2011 by dharmeshkalyan

Today was planned for sightseeing, visiting Akshardam Temple, Qutab Minar, Delhi Gate and others if any. However had not known Akshardam was closed on Mondays (well they all need a day off!).

With not much of a rush day ahead, we let the girls take it easy and got them ready for breakfast around 9:30. Having had the brilliant breakfast at Country Inn Amritsar, the Swati breakfast felt very plain and lacking, at least the Swati Cappuccinos were good. Girls were ok – they were having CHOCO FLAKES (much like our Milo Cereal in Oz)

Had a Hotel Cab booked for the day and started off around 11 am. First stop was to visit the ICICI bank branch, where I was to receive my new NRI bank account details with the Debit Card. These guys are soooo slow in doing things, even looking up my account took soo long. Finally after some effort, he concluded that he had not received my deliverables!! would be another couple of days, not sure why they rang me in the first place and told me it was there!
Back in the Cab

First stop, Shri Laxmi Narain Temple. A beautiful temple in the middle of Delhi. Camera were not allowed in to the temple, so unfortunately no pics of the beautiful artwork they had inside. Nita bought a Puja thali – which the girls queried, was not until they saw it being presented to the pundit did they realise why.

(Shri Laxmi Narain Temple, putting shoes back on outside of temple)

Next stop was Delhi Gate. This whole area of Delhi, was very clean, compared to Karol Bagh and other areas, driver informed us, Minsters lived in the area – explains a lot. Getting into Delhi Gate, there were some kids making bracelets with names on them. Decided to make some, for Neha & Pooja.
Delhi Gate looks magnificent, very well maintained. 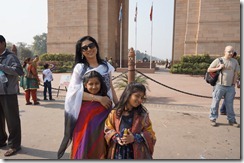 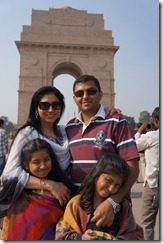 Could not really get under the gate, that area was fenced with armed guards around. Still it was good. Apparently it was New Delhi’s 100 year anniversary, only found out when out of nowhere a NDTV crew approached me for an interview!! I was like what would I know about Delhi. Basically the question was how do I see the change between Old Delhi and New Delhi. My only experience with Old Delhi was when I got off the Train from Amritsar and on the ride back to the Hotel – Old Delhi does look like a dump! So made some bullsh*t around that!! Hopefully someone who knows me, sees me on NDTV soon.
Whilst there, Nita saw a fruit stall selling fresh sweet potato chat and some other stuff, she had to try them. I did try the sweet potatoes and they were very good.

By the time we got back to the cab, it was close to 1, time for lunch, driver took us to an Indian fusion restaurant nearby “Pindi”. Neha and Pooja were again having the Shahi Paneer, we went for some fusion dishes, not bad, however nothing to rave about.

Post lunch, it was time for Qutab Minar, getting there took us close to 1 hour, Delhi traffic is crazy. On the way to Qutab, caught a glimpse of TATA NANO, the car available for under $2K USD. It did not look bad at all. 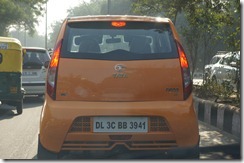 Driver tells me, some business people were buying this for short periods rather then renting a car, then selling it away when work was finished – all costing far less than hiring a car!! Maybe I should have done the same.

Neha and Pooja were well asleep when we arrived @ Qutab. Queued up as a local to buy the tickets, locals = 10/rs, foreigners = 250/rs, !! No problems there, just talk like a local!
Since the Mumbai & Delhi bombings, every major tourist attraction here seems to have Metal detectors (like the ones at airports) installed at the Entries. Qutab also had one, however the weird thing was, everyone going thru was setting it off and the guards were on the side gossiping away with no care at all, one guy even walked thru with a Bike helmet – great security!!

Qutab atmosphere was different, so peaceful once inside, you could easily spend an entire afternoon there – if you love history. 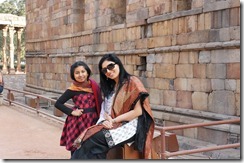 (Girls doing some modelling @ the Qutab!!)

Did lots of walking thru the whole complex, some amazing architecture. Kids also came across lots of squirrels roaming about – fascinated them lots.

By the end kids were getting tired again, got back to the car and asked driver to now stop sightseeing and take us to any big mall near by (it was coffee time & we wanted to see a good mall in Delhi, so far we have only seen the markets). Ended up at the City Walk Mall, this place has all things available here in OZ and a very impressive indeed.

These guys also get into the xmas spirit!!

Needed a quick coffee fix…and this place delivered. Nita had her standard mocha, however the vanilla milkshake was mind-blowing, the best I have had ever, seriously!

Got back to the cab around 6pm and headed back to the hotel. On the way, I got off  at the New Delhi station (Nita & Kids headed back to hotel), had to buy an additional ticket for Pooja for travel to Agra tomorrow. The current reservations had her on Waitlist. New Delhi Railway station has a foreigners ticket office on level 1, they quickly assisted and issued a ticket for Pooja – atleast I have no fear of getting a fine tomorrow from the Ticket collectors on the train.

Back at the hotel, we decided to get room service, as we were all quite tired. Had an early night, tomorrow is an early start for AGRA.

Have always loved travelling and will continue to pursue this love. Favourite Travel quotes: “Traveling – it leaves you speechless, then turns you into a storyteller.” – Ibn Battuta “The world is a book, and those who do not travel read only one page.” – Saint Augustine
View all posts by dharmeshkalyan →
This entry was posted in Delhi, India. Bookmark the permalink.