Posted on October 26, 2018 by dharmeshkalyan

Another early morning for all, it was Amsterdam today, however not a planned excursion, we were doing it on our own.

Did the same thing as yesterday, headed up to see the morning sunrise and Amsterdam!Reaching deck 14, it was cold but not as cold as the prior day. The ship was slowly making its way to the port.

All disembarked the cruise just past 9am. Balia and Vik were selecting the best hop-on-hop-off bus/cruise option, got that for all, and then it was down to the canal awaiting our hop-on-hop-off boat.

The boat arrived after about 10 minutes, BUT, it only had space for 14 and we were 16!! ARRGGGHHHHHH!!!
Waited for the next boat, which was a further 20 minutes away. We could have walked to the city centre in that time

. Nevertheless, we did all board the boat this time! Then it was cruising through the Amsterdam canals! 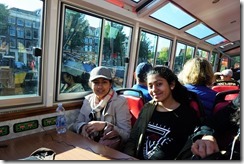 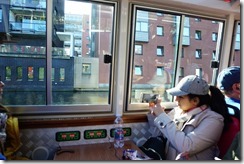 All got off at the stop closest to the city centre, now to explore on foot – always an interesting challenge to herd 16 around streets whilst ensuring we were out of the way of cyclists who were on every street & corner! 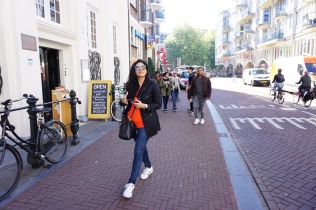 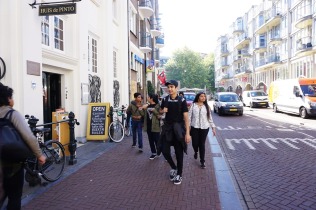 So far of what we had seen, a very beautiful city! Lots cycles, small streets, lots of canals, and just cute streets! Entered a street with a lot of stores leading to the main square. Time for us to see stores selling Marijuana infused products! Neha, Pooja had no idea what that was, a bit of explaining and they were like, OMG they are selling drugs 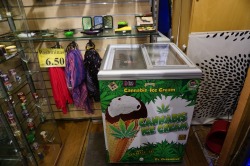 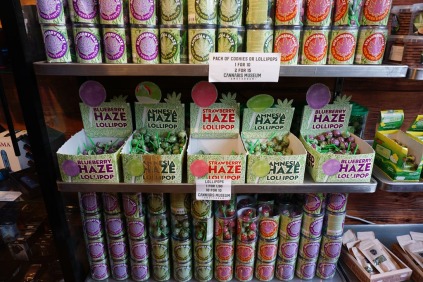 This was a very slow walk, Balia and Vik were super interested in these shops, not for the weed but for the smoking apparatus that was being sold openly, in Oz that was illegal

. Balia was great though, he was visiting every store, but all along giving a great commentary tour to Priya and Neha – they both were enjoying it!.

We reached the Grand Dam Square, this was like the centre of Amsterdam – well I think so? 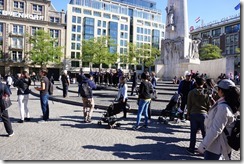 In the square, towards one end, were a lot of pigeons – and they were a LOT! There was a guy selling bird seeds for one euro each! We missed Pigeon feeding at Trafalgar Square in London, maybe this was faith, the opportunity was here now! Pooja and Nita were YES we want to feed the pigeons. Pooja was loving it, and had a few rounds of feeding! 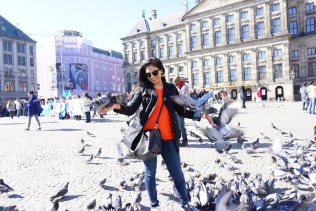 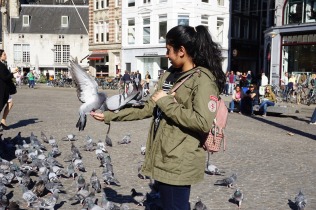 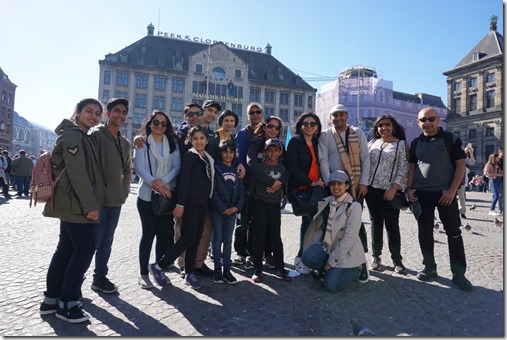 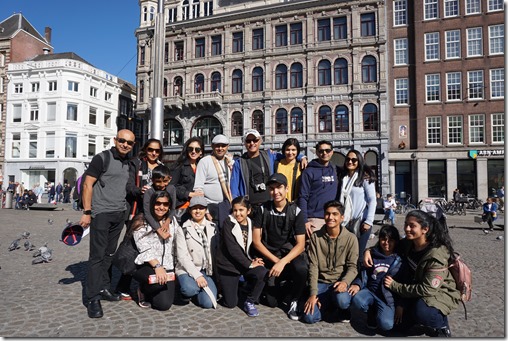 It was time to find a lunch place, and then we would all split our ways, leading from the square, was a pedestrian only open mall street – hoping there would be some restaurants there. Time to explore.

After a bit of walking found an Italian place, and a plus they could accommodate all of us! 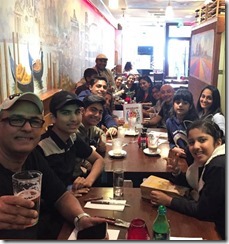 A good lunch of Pizza & Pasta, now to hit the road again. We all split up from here, and agreed to meet at the ship by 6:30pm, plan was feed the kids on the ship, leave them on board and then couples head out for a night in Amsterdam!

Lots of walking around the place and a bit of shopping as well. Pooja wanted Pandora, could not say no to my baby! 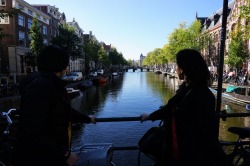 It was then a walk thru the red light district, Neha was telling me that Bhavik kaka (my bro not Doc) had told her NOT to go there, Neha was “so what was it?”. No explaining but lets walk through.

Walking thru that lane was an OMG moment for them!

It was 5pm and Neha, Pooja were both getting tired, decided to head back, Taxi to the ship. 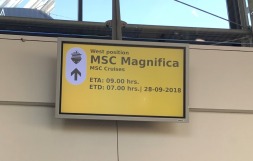 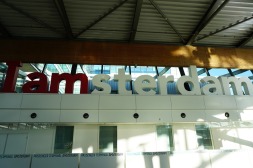 The others were all slowly showing up, Balia was the last to come aboard. Dinner was in the buffet, enough of L’Edera! Kids all done, for the couples we did eat from the Buffet, but instead of eating there, we headed next door to the indoor pool area, this place had lots of tables where we could all sit together and there was a bar close by! Drinks kept flowing and a couple of us kept heading to the buffet to refill finger foods! By the end of it, we had a good lot of plates on our table!

Neha was not feeling too well she decided to hit the bed early, for the other kids, we put Priya incharge, and they were happy to stay in the lounge next to the kids area. There were a few activities for them all, plan for them was to play till they were bored then head to the cabins. Most probably they would end up in the one cabin and cause havoc there!

Kids sorted, now we could get off the ship again to enjoy the Amsterdam night life.

Out of the seaport, called an UBER van, when it arrived, it was then we were told only 6 could fit

and unlike Taxi’s, UBER drivers were very strict with the number of passengers they carried. Asked the driver where the best place to try space cakes were, agreed on an address, then Doc and I went in the VAN, Vik and Balia took a nearby Taxi to the same location.

The place we were recommended was Bulldog! Walking around the streets, we seemed to get to the right area, but there were 4 Bulldog cafes. Got into one! Lots of people around. Got to the bar to get the cakes and some beers/wine, the guy behind the counter was like – NO ALCOHOL HERE, only coffees or Tea!!! I was like, what da, you are serving cannabis cakes yet no alcohol!! Well that was to be, espresso’s with some special chocolate cake – this I was looking forward to!

My experience of the cake, it was super moist and one of the best chocolate cakes I have had. No real effect or maybe I was just enjoying it and did not realise anything. Spent a good amount of time here just chatting and lots n lots n lots of laughing ….. were the space cakes the reason ?????

Next was walking the red light area, had to show that to our ladies – Nita had already seen it, but the others had not!.
There was more fun and laughter that is best not shared online

It was way past 1 am, time for some dessert, unfortunately the “real coffee” shops (not the ones that sell cannabis) were closing or already closed!
No luck there with dessert, decided to head back to the ship, grabbed a Taxi van and got lucky, driver was prepared to take 8 of us. It had been a great night with some amazing Amsterdam experiences and memories, tomorrow was a sleep-in day, we would be at sea all day & night.

Have always loved travelling and will continue to pursue this love. Favourite Travel quotes: “Traveling – it leaves you speechless, then turns you into a storyteller.” – Ibn Battuta “The world is a book, and those who do not travel read only one page.” – Saint Augustine
View all posts by dharmeshkalyan →
This entry was posted in Amsterdam, Cruise, Netherlands, North Europe. Bookmark the permalink.