Posted on October 24, 2018 by dharmeshkalyan

It was d’day for the cruise, today we were transferring to La Havre port to board the MSC Magnifica on our 7 night cruise of the north seas. En route to La Havre, we had arranged for a quick stop at Versailles, to visit the Palace of Versailles. Our transport was picking us at 9:15am.

Early morning start for Nita and I, we wanted to get another load of laundry done, so first up I was off to Laundromat, whilst Nita was organising the luggage and getting girls ready. With the ship cabins being small, we decided to leave 3 pieces of luggages at the hotel, no need to carry excess stuff on the ship, Nita was sorting that out.

I made the most of being at the Laundromat, another morning run of espresso (standing at the bar with a few frenchmen), and some freshly baked almond croissants!! By the time I got back to the hotel, it was around 8:30am, as planned Nita and girls had finished their breakfast, now all that remained was finalising the luggage and heading down.
All downstairs with the luggage, it was then I first met Balia & family in this trip, and did I get a good rubbing, where had I been last night & early morning, why were the kids down for breaky alone and where were you two then – lots of good laughs!!

Ready for the cruise

Everyone had checked out of their rooms and excess bags stored in the secured storage area, now it was a wait for the transport, minutes ticked over and it was around 9:30am, still no sign and we were not able to call him – phone was not going through. Then just like that, the concierge brings this guy to us and checks if we were waiting for transport to La Havre – YES!!! So our driver who could NOT speak a word of English, was waiting in the lobby for what may have been a good 5-10 minutes for us!! Well atleast he was here, lets go, not yet, where was the mini BUS??? No where to be seen. Translating via the concierge, apparently the bus was too big to come in our street and it was on the main road, which was a couple of blocks away!! It was strange and we were like, look outside there are delivery trucks all around, surely you can come in. After some convincing, he agreed but we had to walk a bit further up the street,  atleast it was only a minutes walk.
Turning the corner, we could not believe our eyes and finally understood why he was soo hesitant, this was not a mini bus but a COACH, with capacity for 50+ passengers!!! Damn we could fit all three of our soccer teams in here!!

Time to load the coach… 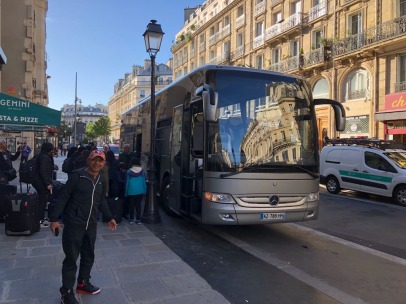 All loaded and in the coach, time to move. The driver was saying something in French which we had no idea, so all we could say is, “yes lets go ahead” and kept pointing in front. We had only moved one block when the bus stopped, the guy was pointing ahead, finally realised, No Entry ahead and a very sharp left turn into a small alley which the bus could not make nor enter the alley. Now what, the guy talking to us in french and a lot of hand signals, finally figured it out, we had to reverse the bus but for that we needed to stop the traffic behind it!

Doc and I got off the bus, and went behind the bus to stop the traffic, wow, in Paris and we were controlling traffic. A few drivers were giving us the look but no one actually got angry! 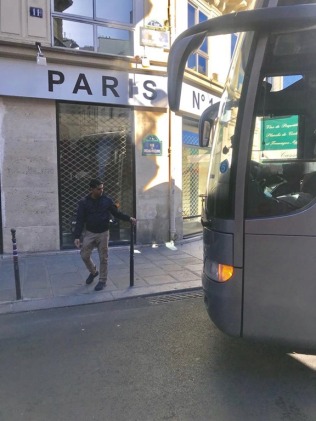 Short video footage of the drama

After about 15 minutes of traffic control we were finally through, time to get on board, high 5’s with the driver, time to head out

. This is one experience we will all remember for a very long time!

It was just over an hour before we reached Versailles, lots of coaches parked around – this was a major tourist stop! Had no idea how big this was!

The queues were massive to get in, it would be atleast a good hour before we got into the palace if we queued, unfortunately we did not have that much time! Made the most of the views we had from where we were…

Time to move, back on the bus and heading to La Havre.
With sign language Doc was able to tell the driver that we should stop over for food and washroom break when possible! Was amazing how we communicated with each other, he did not understand english and we had the same trouble with french, still somehow we managed!!

Lunch break was at a highway roadhouse with a McDonalds. Time to refuel all of us, good 45 minute break, than it was back on the bus.

Another 45 minutes of driving, it was about 3pm we got in at La Havre. He got to the port however was not able to find a way of getting to the wharf where the ship was docked!! The signage to the wharf was for cars or small trucks only, it had a height restriction – bus was too high

. After two attempts of finding an alternate way, he told us the only way was to walk to the ship!! We could see the ship, but it was still a good 20-30 minutes walk, plus we had our luggage!! More debating and in the end we had no choice but to start unloading. Tried to find an UBER – damn no UBER in La Havre, taxi’s – none around! Frustrated we were almost set to walk, when the driver came back to us and informed us he had found another way, reload into the coach!! Phew!

Went around the corner and into a street that came to a gate for the British ferry, ahhhh not our ship?? Ok so it was a wrong turn, but instead of making a 3 point turn to get the bus out of there, he decided to reverse again. So how do you reverse on to a round about, simple, you get Doc and Dharma to get off and stop the traffic

, it was traffic control duties again, a few minutes of holding off traffic at the round about and then we were on our way. Finally made the right turn and it was at the departure point for MSC cruises!!YAY we were there. This was a big ship, well big for us anyways! Unloaded our luggage and into the departure building – which really was a large shed! All checked in and luggage processed, went through the photo area to take our pics with the ship wheel and then a lot of selfies with the ship, everyone was excited to board! 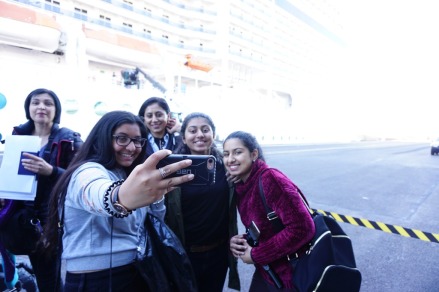 Boarding the ship was easy and painless, I guess we were boarding from a small port, the number of new guests were not many and hence there was no waiting and we were soon in our rooms getting settled. The cabins were nice, infact they were better than I expected and included a lot of storage. Nita unpacked most of the bags into the cupboards and hangers, this way we did not have to worry about opening the bags during the cruise!
Our dinner was booked at 6:45pm, so had a couple of hours to wonder the ship.
Whilst doing a bit of wondering, it was announced all new guests had to come with their life jackets to the theatre for the evacuation briefing.

Briefing done, time to drop off life jackets back in the room and we met the gang for dinner at L’Edera (This was a a-la-carte style restaurant.) Seated on two big round 8 seaters, kids on one, adults on the other. Now to get the drinks flowing!! The drinks package we all had was brilliant, no need to look at prices etc, just order what we wanted and keep staying hydrated

. Whilst the drinks and wine were brilliant, the food was not the best, very bland

. For the adults it was not a massive problem but was an issue for our kids!
Decided to head to the buffet post dinner, it would have more variety for kids.

Post dinner we headed to the top deck, above the buffet restaurant. It was good timing, sun going down and the ship had just started moving – good opportunity for more pics… 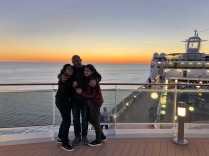 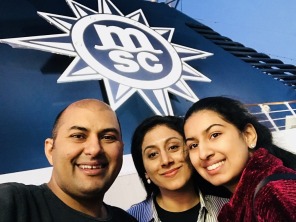 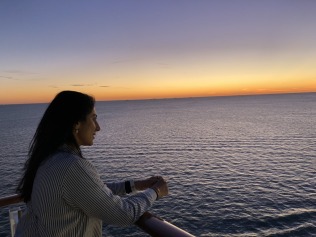 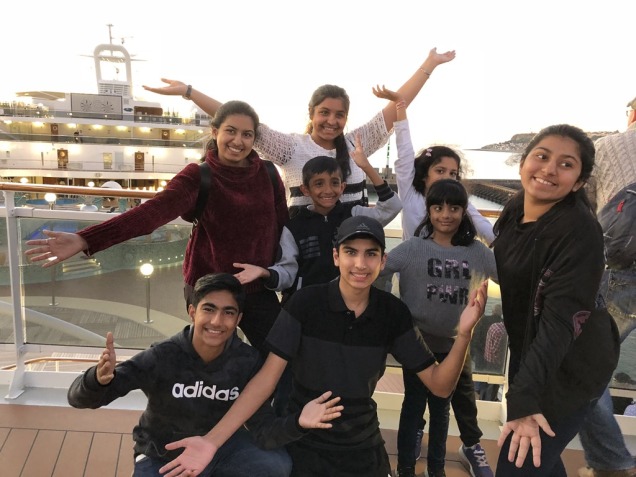 Was getting very cold in the open, time to come down to the buffet, kids wanted some snacks.
It was then off to the evening show, a dance musical. Nice musical, now to level 13 indoor pool area, this place had a good bar and lots of seating, plus it was enclosed – very important in the cold weather!

But first we took advantage of the many photographers around the place, lets take some portraits…and we had not even changed!

Now to join in with the gang on level 13,
It was time for more drinks and cocktails.

All sat around just going through the very eventful day, somehow with all the hiccups, we still made it to the cruise – wow!!
Around 11pm we decided to call it a night, tomorrow was the Belgium tour, we needed to be ready to go at 9am!

In the room, Pooja and Neha were super excited to be sleeping in their bunk beds. Pooja also found a small nook near the cabin window. 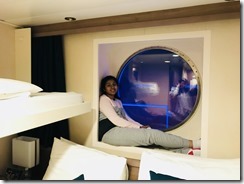 Have always loved travelling and will continue to pursue this love. Favourite Travel quotes: “Traveling – it leaves you speechless, then turns you into a storyteller.” – Ibn Battuta “The world is a book, and those who do not travel read only one page.” – Saint Augustine
View all posts by dharmeshkalyan →
This entry was posted in Cruise, France, La Havre, North Europe, Paris. Bookmark the permalink.