Posted on October 18, 2018 by dharmeshkalyan

First morning in Paris, today’s plan was to get on the Hop On Hop Off bus and cover most of the sights. First to breaky, the spread at Novotel was nice, not the best but better than Holiday Inn London. My favourite was the French Madeleine cakes, they were sooo good!! If you are in France, you so need to try that!
They did not have an omelette station, however the staff were happy to get us the poached eggs we wanted – nice service!

Back in the room post breakfast, kids had jumped out of our windows which led to an open courtyard overlooking a giant poster of Paris!! Wow, this was cool.

The courtyard was connecting all our three rooms, soon everyone was out there rooms on to the courtyard, kids were loving it. If photographed at the correct angle the giant poster could be used as a great backdrop that could convince viewers to believe this was the real view. Whilst there, we called back home talking to mum and Neha wanted to show the backdrop to Bhavik kaka (my bro), we said to him look at our amazing view, and seriously for a few seconds he believed it that we were having such an amazing view!! It was not until I had zoomed out and shown him the surroundings that he realised it was just a poster!! 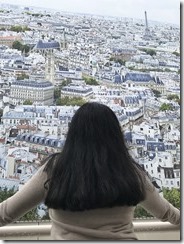 Enough of mucking around in the courtyard, time to head down to the reception, where we purchased the tickets to the hop-on-hop-off bus. Our nearest station was the Louvre museum, a 10-15 minute walk. Time to hit the streets of Paris herding our group of 12!

We arrived at Louvre sooner than we thought, the place was amazing, more opportunities for everyone to take more pics …. unfortunately I forgot to reset my Camera’s ISO to auto, (last night I had it on a very high setting for some night pics) and thanks to that a lot of my days pics turned out very grainy and not sharp at all

. My girls (all of them) were not too impressed with me! 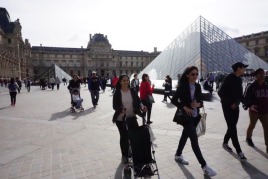 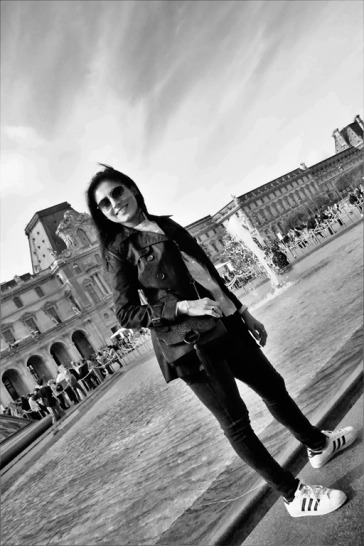 Enough pics, finally managed to move everyone to the bus stop, bus was already there and was leaving in 10 minutes, got on it and were lucky to get good seats on top. 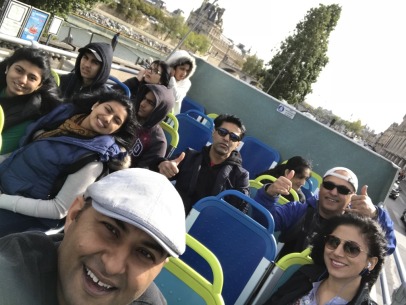 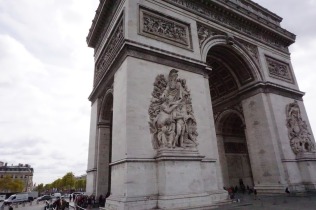 Had decided earlier to not get off at any sights and wanted to see what was around, and in the second loop we would get off, unfortunately not the best move, this tour was taking a while to make one loop, let alone the second!! Got off at a stop post Eiffel, saw Laduree and it was time for Macaroons!!

A walk around the place to see if we could find a cafe for lunch, unfortunately not much there, time to get back on the bus and get off at Champs Elysees. A bit of walking about looking for a good place to eat, settled on Roma Pizza!
Everyone was in need of some refueling, a few Pizzas and Pastas were ordered to be shared! 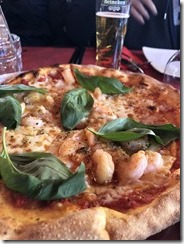 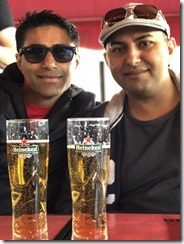 Food was very nice, we were soo hungry no one really had a chance to snap more pics of the food!! Post lunch, we all decided to hang around in Champs Elysees till around 4 pm (giving us close to 1.5 hours here), then we would catch the bus and go to Trocadero for some Eiffel Pics. All the families went in separate directions, lots to see around the place.
Walking around Pooja spotted Haagen Dazs ice cream, could not say no to that.

Back on the bus, we headed to Trocadero, and the view from there is simply amazing!! 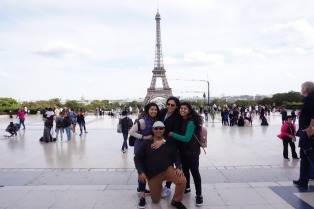 On the sides, located a statue which would make an interesting pic, Dian was more than happy to model the way I wanted!!!

We headed across for some coffee, Paris style, seating outside facing the streets! 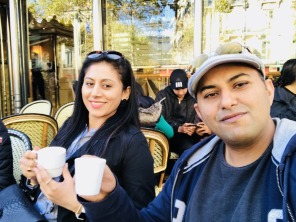 Whilst the espressos were great, the Mocha and Lattes were no where as good as what we get back home in Brisbane! I reckon Australia has the of best coffees in the world! Break done, back on the bus heading to Louvre, and then a short walk to our hotel, it had been a long day!

At the hotel, bit of a refresh then all decided to do a Laundry run and then head to dinner – the concierge recommended a French place which was very close to the Laundromat. Was funny, the entire group of 12 entered the Laundromat and took us a bit to work out how to use the machines which had instructions all in French! Washing started, now to head out for dinner.

Got to the French restaurant, place looked great and was packed!! We were not lucky for space, it was Friday night, we decided to atleast book for tomorrow. Whilst Doc was doing the booking, Tina browsed through the menu and not being too impressed, asked Meeta to also review it. Turns out the place had Frogs leg, Snails and lots of interesting varieties that honestly we were all not too keen on, other than Vik, all backed out, cancelled the booking and headed out to a nearby Thai place. All settled in and ladies ordered. Whilst they were ordering, me, Vik & Doc, headed back to the Laundry to start the dryers! By the time we got back food was already on the table, and was it good!! Very good Thai food indeed.

Dinner done, ladies took the kids back to the hotel, and us guys were back to the Laundromat to collect our dry clothes. Reaching there, the door was locked!! Oh oH! The place closes at 10pm, and it was 10:10pm, doh!, we just missed it. Nothing much could be done now, we simply had to get here tomorrow morning @ 7am to collect our laundry! Ladies were shocked to hear that, kids nighties were in the dryer!! Well time to improvise!

Put the kids to bed, then adults all headed out to Faust, the night club from Befikre movie. Stepping outside, it was cold, about 12 degrees now, noticed a 6 seater taxi, hailed him and we were off to the Pont Alexandre III bridge, under which Faust was located.

Getting there, we walked down to the lower area next to the Seine river. Amazing views to the bridge. 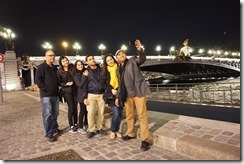 First stop was the Flow bar, a floating club/bar on Seine. Time for some red wine and enjoy the Paris night! 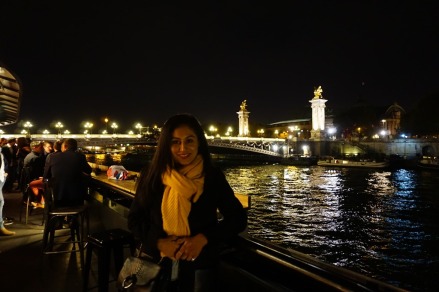 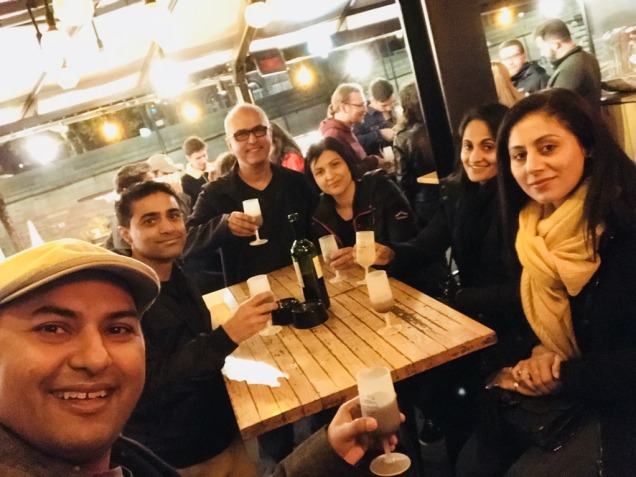 Hung around there for a few drinks, however the falling temperature was not helping! Next stop was Faust, only a short walk from Flow, unlike the movies,  the club was not outdoors, I guess that would be a summer thing! Stayed there for a bit. 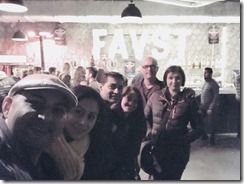 It was getting late, called it a night, out of there, Up the stairs to the roads, and no taxis!! I called an Uber VAN, which luckily was only 3 minutes away! Doc and Vik had never used Uber before that and this was their first exposure to it. Got them to set it up, we would be needing a lot of Uber in Paris! Our Uber VAN come on time and we were off to the hotel. It had been a great day and tomorrow morning we had to be up early to get our clothes from the Laundromat Dryer!