Posted on October 17, 2018 by dharmeshkalyan

Early day for all, leaving for Paris via Eurostar train, kids were super excited about taking a train going under the ocean bed…. to an extent, I was just as excited

. Our transfers to the train station were arriving at the hotel at 9:15am.

Early morning breaky than all were down with their luggage by 9am. Check out all done and now it was waiting for our transfers. The first van arrived on time, however then it was a looooong wait, apparently there had been an accident which was causing a lot of grief in coming to the hotel. Our train was at 11:30, and we had to be at the station checkin one hour ahead! Clock was ticking, around 9:50, the other driver called and said he was just around the corner. Decided to send one van ahead to atleast get some of the luggage sorted and find the right place. Meeta, Tina and the kids went in the first van. It was about 10am when the other van finally arrived, quick loading of the vans and then it was out of there. It was a good 30 minutes drive time! En route to the station, we were discussing how to get quickly into checkin without missing our 1 hour closing window, problem we had were the number of luggages, we all had about two bags each per person to wheel!! Decided as soon as we arrive, Doc would take all the passports along with Nita and Meeta and the young kiddies to the check-in to commence the process, whilst we would all somehow try and get the luggage from the kerbside to the checkin counters. We did not want to miss the train!

Arriving at the station at just past 10:30am, as planned Doc, Meeta and Nita went for the checkin counters, and we were literally all at the kerbside with around 20 pieces of luggage! And there were no trolleys! What is this place, no trolleys!! What next, left two persons out on the kerbside with the luggage, Me, Tina, Prashil, Neha took as many bags inside the terminal close to the queues – which were looong. Time to leave Neha with the bags inside the terminal, and all of the rest ran out to get the next set of bags. About three rounds and we were all done. Next problem, the checkin line was moving very rapidly, which was good, however we were being asked to go in the queue with the bags – how are we supposed to move these many bags in a queue without trolleys, and by this time Doc, Nita & Meeta were almost at the check-in counters. Lady at check in counter was understanding, and informed Doc not to worry about the 1 hour early checkin, we still had a lot of time but had to get the bags through. Nita and Meeta came near the side where we were with the bags (we were outside the checkin area and outside the queues), telling us to pass the bags under the ropes that divided us and the checkin area. Customer service lady next to us was not impressed and said you cannot do that and we had to take the bags through the queues …she just was not getting it that we could not carry it amongst us few, as the others were already at the checkin. Tina got very frustrated and there was some heated exchanges between her and the customer service rep. Whilst the heated exchange was occurring between them, we started quickly sliding bags under the ropes to Nita and Meeta, in less than a minute all bags were at the check in counter and we all slipped into the checkin area – am glad Tina kept the other lady busy!

The checkin area was unlike planes, all they did was take our tickets and now we had to move with our baggage through to immigration!! Time for each family to take their own bags, me and Nita took 2 each, leaving Neha and Pooja with one hand luggage each, the same was done by others. Slowly making our way through to security screening, then through to UK departure immigration and then another set of immigration counters welcoming us to EU!!! Wow we were officially in EU, even though we were still at he London terminal

. Immigration cleared, now waiting in the busy waiting area for the doors to open to allow us to get on the platform, around 11:05am doors opened and then it was a lot of people getting onto the terminal. The train itself was very loooooooong!! Had not anticipated that

. Our tickets were for carriage 10, and we were currently at 20 (I think or thereabouts), each carriage was long so a bit of a walk. Finally got to our carriage, now to load all the bags, Doc, Vik and I made a human chain, Doc was on the platform passing bags to Vik, Vik was passing these to me, I was stacking them in the luggage area in our carriage. All luggage in, we were finally all aboard. It was only another 10 minutes and the train was moving!!! Wow what a morning it had been, a bit crazy but atleast we were all on the train and Paris was the next stop.

Time to get some much needed refreshments for all! 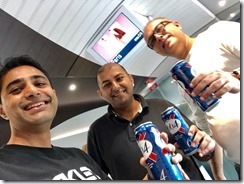 Guys settled for beers, ladies were into their sweet wines, and hot chocolates for kids, accompanied by lots of nuts, crackers and chips, that was the best we could do for food there! Then it was a chance for all to nod off for a bit.

Out of the tunnel it was still a while before the train arrived at its Paris stop. About 2pm we arrived, then it was unloading the baggage and walking to the arrivals area to look for our transport. Doc had organised for transport on the way to Harry Potter yesterday – am soo glad it was done, this would have been a nightmare to find transport for this many people at the station, especially with all the luggage!

Located our drivers, off to the VANs and onward to our hotel – Novotel Les Halles. To be very honest, the drive from the station to the Hotel did not pass any nice landmarks. Infact the place did not look that appealing ….hmmm hoping it would get better! Arrived at our hotel, phew this place was nice, outside were a few cafes all with chairs facing to the streets – so European!! Only see that in Hastings St back home! It was everywhere here.
The hotel was better and bigger than the Holiday Inn London. Rooms all allocated, we were next to each other on the first floor! Rooms were a decent size, nothing to complain. It was already past 4pm, time for us to get a late lunch / early dinner, everyone was hungry.
The concierge recommended we head to La Perla, an Italian place just around the corner, he was good enough to call ahead and book the place for us – awesome service!
All out on the sunny cold day, yay…. we were in Paris! 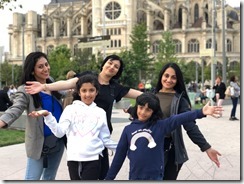 Small walk through a park, passing a massive shopping centre which did not rise up but rather go into the ground?? Further up,  the narrow cobblestone streets were lined with food outlets, and cafes, what a place this was! Reaching the street where La Perla was – wow, this was like a market street, something I would have seen in movies or as a postcard – I am so in love with this place. I do not think my pic does justice to this street. 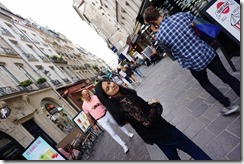 Located La Perla and informed him Felix from Novotel had called! They organised our table of 12, first some drinks, and boy was it a big cocktail that came!! 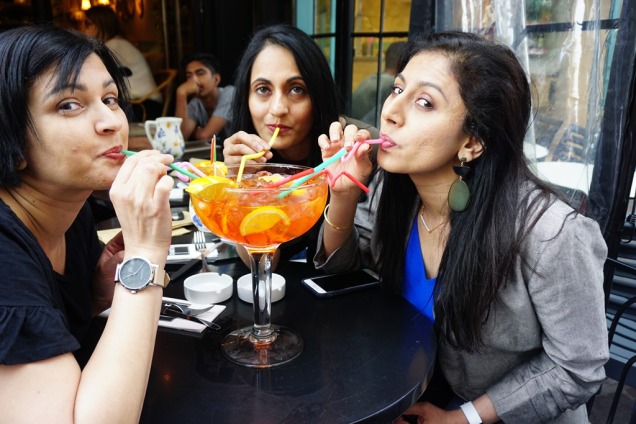 Ordered a variety of Pasta and Pizza. For us 6, we ordered our pasta/risotto with extra chilli and garlic, boy did they know how to add that! This was one of the best Pesto Prawn Pasta I have had. Nita has the Salmon risotto, again just amazing. 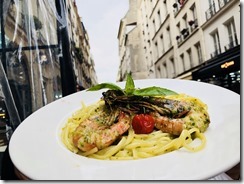 food pics with a view!

It was a hearty meal, kids and adults all had a good feed. Since we still had sunlight remaining, we decided to head to Eiffel tower. First back to the hotel, Doc still had to get his room, and then we all headed to Eiffel.

(Outside the hotel waiting for our taxi to Eiffel)

On the way there, the first glimpse of Eiffel was wow!!! Neha and Pooja were OMG, this is so pretty! Finally @ Eiffel, the place was busy, well was expecting that! 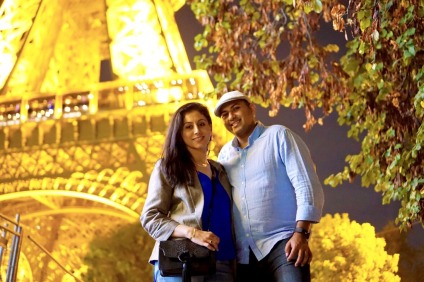 (an sometimes it is too hard….love Pooja’s ability to make faces)

Lots of pics being taken by all, we must have spent a good hour there. Time to move on, Doc suggested we take the tuk tuk to Champs Elysees! Hired two, ladies in one, men in the other, kids were shared!! 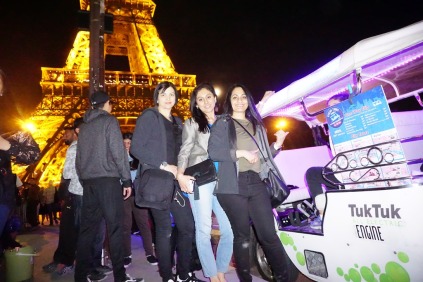 We got off near Arc De Triump, at the top end of Champs Elysees. I remember this place from the prior Dec visit, was super cold and brightly lit with xmas lights, was not the same this time. Still the place looked amazing! 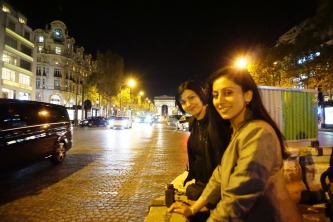 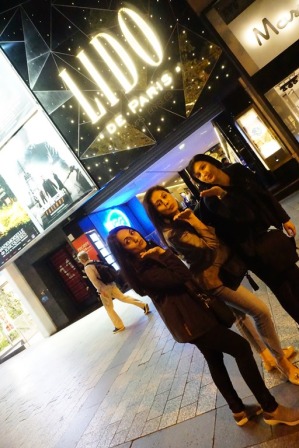 For dessert we headed to the Laduree, found a table for 12, time to try some of their cakes – disappointment!! they had run out of most of their best sellers

. Only a couple of options to choose from, ordered a couple of varieties and drinks for all. Me and Vik settled on Beer – the place inside was warm and we needed a good drink! Dessert was good, kids enjoyed their hot chocolates!

Time to call it a night, now to find a taxi, for some reason there were NONE that were free, all of them were occupied!! I wanted to call UBER but the other guys did not have so that was out of the question, all had to stick together (it was our first nite here). A few more minutes, the ladies hailed a people mover VAN, asked him if he could order another one as we were 12, and the best response he gave, I will take you all, but at a price which was quite high! Then some negotiations and finally we agreed on a number. Time to load 12 people in the 8 seater!!! Somehow we did manage and infact it was not too bad, these Mercedes VANS are quite big. Drive to the hotel was interesting, all along the driver kept going on about how he hated UBER and his level of service was so good and he was all about customer service etc. A lot of one way communications…….. me and Vik were seating in the front, am glad Vik was in the middle ;). Finally all at the hotel, a few more laughs about our ride back, and the day overall, it had been a very crazy & stressful morning, but the afternoon in Paris had been nothing short of amazing!! Two extremes – we were all tired. Tomorrow was not a sleepin day, we were doing the hop on hop off bus!