Today was sightseeing downtown Toronto, then dinner at Hansa foi’s place. Early rise up, masa dropped us at their local GO transport station, from where we got an express BUS directly into downtown. The bus ride was just over 40 minutes.

Arrived at Union station around 10am. First stop CN tower.

Union station had a walkway leading to CN tower, simply followed that. Noticed how it was all enclosed and heated, good facility for locals to move around during the cold winters.

Finally got to CN tower, wow, what a structure. 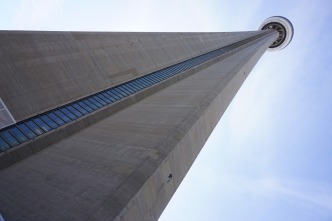 Finished that, next to walk around and explore downtown. The information desk at Union station had been very helpful. He had provided some good pointers, a map and also explained the PATH system, an underground network linking all the office towers in the downtown district. The PATH network also featured a shopping/eating regions. So why not explore the PATH network, into the PATH underground areas and soon were navigating ourselves (with some help from locals) around the network. It was quite amazing, how all the buildings were linked, this was so well thought out. After around 15 minutes, it was getting boring, not much other than food outlets appearing in the underground network, back up on the outside.

Love how Toronto uses Trams, they definitely add character to a city. 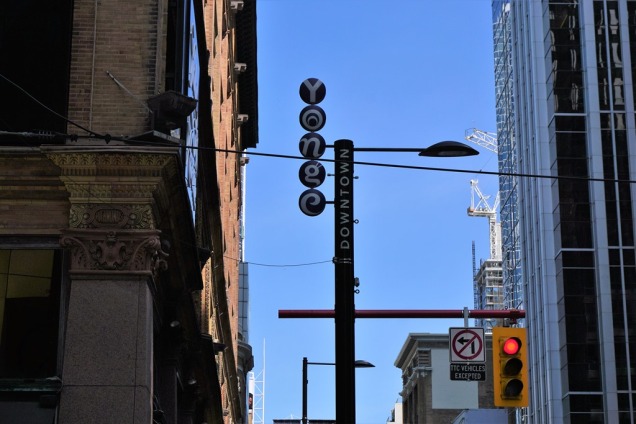 Found our way to Yonge St, apparently the famous st of Toronto. Off that was the Eaton Centre mall – our next stop.

Walked around the place a bit, unfortunately as we were not shopping anything till US, this stop turned out boring. Back on to Yonge st, headed up exploring the area, passed the Dundas Sq, lots of people buzzing around there.

Further on Yonge st, located the place Dhiren had recommended, “Salad King”, I was a bit sceptical going in there, salad was not something I enjoyed.

Walking in, the place was packed! And THAI food was the flavour, all looked soo good, a far cry from SALAD

.
The setup reminded me of Wagamama, long communial tables, however instead of benches, they had individual chairs with a basket under the seat to hold your belongings – nifty idea! 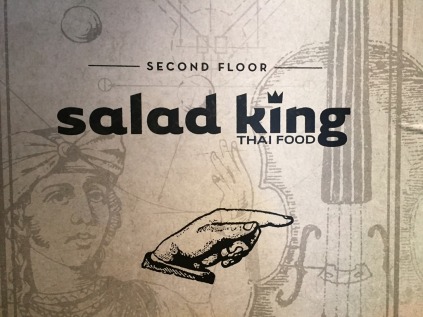 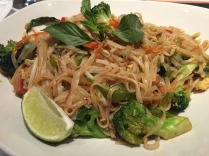 Ordered the Basil noodle and Penang Chicken Curry. Food was excellent and spicy, just the way Nita likes it – HOT!

A very good lunch, thanks Dhiren for the brilliant recommendation.

Next stop we headed to the Mills region, Rini had suggested that last night, it was supposed to be an old industrial area revamped with coffee places, eateries & art galleries whilst retaining the historic structures.

It was a fair way and since we had a few hours to kill decided to walk it, walking does allow for a much better exploration. 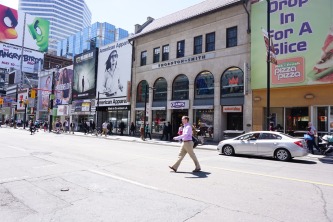 Getting near the old town area, we could see the difference, gone were the towers, here the building were lower (3-5 stories high) and older.

Finally made it to the mills area. The entry had a giant love heart sculpture and people were posing with it, so why not Nita. 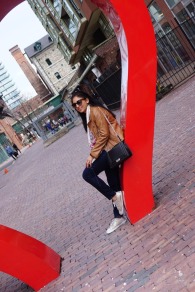 Walked around the place, there were a couple of coffee places and restaurants, along with some galleries, other than the coffee shops, nothing much of interest here for us. Settled on a chocolate place that seemed to do coffees and desserts, the requirement was a nice comfortable place to sit. We ended up hanging around the place for over an hour, just chilling.
Overall, I was not too impressed with downtown Toronto, could it be that seeing Chicago first had caused that, not sure but it definitely does not make my list of places I could visit again.

Post 4pm, we made our way out of the area, grabbed a cab to union station, next to catch the GO train to Rutherford station (Kiran was to pick us from there). Located the correct train and made the 4:40 pm one. Informed Kiran we had left a bit early, also we wanted to finish of early tonight, for two reasons, 1) Nita wanted to meet her other cousin – Dharmesh (same name!), 2) tomorrow we had a 8:15am flight to NY, needed to be out of the house by 6am or earlier.

Kiran collected us from the train station, was good seeing him after a long time, first stop was to meet bhabhi, unfortunately she was working today and unable to be home for dinner. Nita remembered her very well, she was at our wedding. Was very good to catchup, she was insisted on us having a coffees, settled on a mocha and ice mocha.

Next Kiran drove us around the places and showed us one of the biggest outlet malls, this thing was HUGH, drive around it took some time, imagine walking it! He asked if we wanted to tour inside the mall, Nita was all YES, however I had to remind her of our time limitation, time to head to their home.
Was so good to see Hansa foi and fua. Last time I saw them was in Brisbane for Vinals wedding.
Hanso foi had gone out of her way to organise dinner for us!! Fish chaknu, chicken and then rice. Good dinner and even better catch-up! 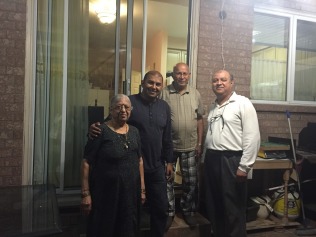 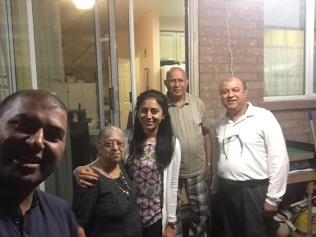 Was around 9pm when we finished off, was soo good to have caught up with foi, fua, Kiran and Bhabhi. Thanks all for an amazing night!

Kiran drove us back, arrived back at masa’s place just before 10pm.

Nita called Dharmesh (her cousin) to come over for a catchup, she was yet to meet him. Glad he did come by, was good to have caught up with him. We chatted for around an hour, by which time he had to go, but that was not the end for us, we stayed up past mid-night chatting with masa and masi. Masi was already missing not having Nita from tomorrow

, she had grown very fond of her.

Last night in here, tomorrow morning we fly to NY.

Have always loved travelling and will continue to pursue this love. Favourite Travel quotes: “Traveling – it leaves you speechless, then turns you into a storyteller.” – Ibn Battuta “The world is a book, and those who do not travel read only one page.” – Saint Augustine
View all posts by dharmeshkalyan →
This entry was posted in Canada, Toronto. Bookmark the permalink.