Early morning start, flight to NY was at 8:15am. Masa & masi both came to drop us off at the airport, an emotional farewell for Nita & masi, they both had got very fond of each other. Big thanks to both masa and masi for accommodating us and taking us around the places, they gave us the best time and made us feel right at home – was so much appreciated and we hope to see you soon in Brisbane

Into the Pearson terminal, first challenge were the check-in queues, flying Air Canada, their check-in staff were sooo slow. It took us over 30 minutes to make it through a single line, pity the people who were behind us in the folded section of the lines. Being a US bound flight, the luggage is tagged but not accepted at the check-in, you need to take that along with you to the special US immigration area, surprise surprise, more queues and it was worse!! Another 40 minutes of waiting

. Finally made it through immigration and then only were checked-in bags taken from us. Next the security screening, taking off the shoes, belts, x-ray and finally into the terminal… phew what an effort to fly into US!

The departure area was nice, found a nice place near the gate for breakfast. Could not find where to order and only then realised each seat had a dedicated ipad and paystation to order your meals, coffees – wow!! We swiped through, ordered our chai-latte, breakfast wraps and paid – all self serve without interacting with any wait-staff, at-least no tips! Food and drinks arrived soon after, what a system!

Flight to NY was uneventful, landed into La Guardia airport, not the flashiest of airports, out of the terminal quickly – no security checks, this was like a domestic flight – all checks were done in Toronto on departure.

Grabbed a Taxi to our hotel on W46th St Manhattan! Bring on NY. Traffic to the hotel was well NY traffic, roads all cramped with cars, a very slow move, drove passed East Harlem and the neighbourhoods, first impressions were not that great!! A very run down place

. Was not until we were on Central Park West where things started to look a bit better. Finally arrived at the hotel – Riu Plaza, this place did look good

It was around 11am, we got lucky with getting a room early (normal checkin time is post 3pm). True to all blogs I had read about NY accommodation, rooms were small! Arranged ourselves – this was home for the next  8 days!.

Time to explore the place, first stop Times Square, stepping outside, we could feel the NY crowd & noise. Horns and sirens were a common thing here – I thought it was only in India people used horns like crazy! Got to Times Square, the place was well – crowded, that was expected. Big display screens lighting up the place. Unfortunately there was lots of construction going on, making parts of the walk ways inaccessible. We walked around the place a bit, was already past 1 pm, time for lunch.

Headed to find the The Halal Guys – highly recommended by Kiran last night. Google was handy in locating them, corner of 53rd and 6th Ave. Arrived at the place after a fair bit of walking – town blocks here are big! I was looking out for a restaurant and finally noticed it was a bunch of food carts at the corner. Had a big queue and the smell was soo good – time to try NY street food. 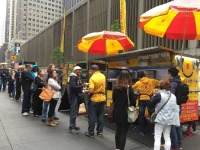 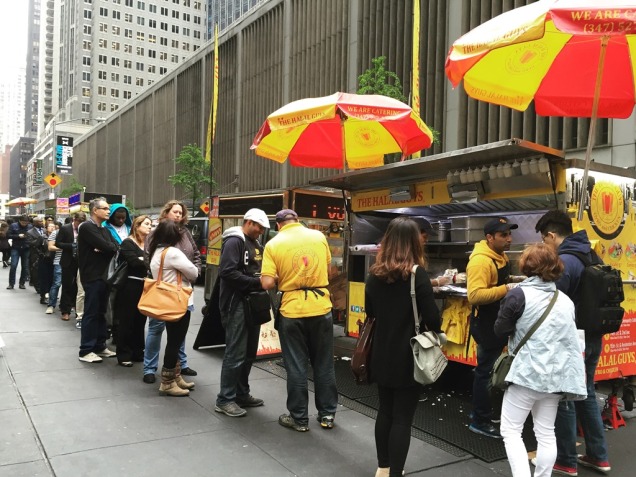 Wow what a lunch, this was similar to our kebabs back home, however these guys used a different style of bread – like a naan in some ways, and the flavour was amazing, no wonder people queued here whilst the food carts opposite them were empty. Highly recommended – stop by at The Halal Guys on 53rd & 6th ave,  for a great lunch!

Next a walk down on 6th Ave towards 34th st to visit the largest Macy’s – some refer to it as the largest department store in the world!

Walking along, passed the Rockefeller plaza, home to the Tonight Show.

All along, it was amazing to see streets packed with pedestrians! Soo many people in NY city.

Got to Herald Square, sort of a mini times-square, big billboard and lots of shopping places here, Nita was off to Victoria’s Secret in a flash (this would have to be their flagship store – was massive) – not something I was too keen on, settled for the browsing the other stores around.

Next was browsing around in Macy’s, wow the place was huge! It was strange to notice restaurants inside Macy’s, there were 10 floors, and each floor had some sort of food outlets, the kids floor had its own McDonalds!! 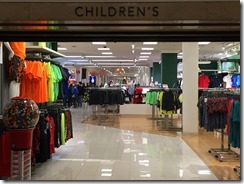 Macy’s at Herald Sq, Children’s section have their own McDonalds!

Soo much walking within one store was tiring, time for a break, around 5pm we headed to the Italian place “Stella 34 Trattoria”– yes within Macy’s on the 6th floor. Got a great window table with views to the Empire State building! Ordered my mandatory beer fix, and a Linguine to share – this was simply a refuelling stop to keep us going

Back to more shopping. Finished off around 8pm, time to head back to the hotel with all the shopping. Friday night, streets were packed with people, and lots of them around. Walk was over 20 minutes. Dumped the shopping bags in the room and were out and about in a flash. Yelp to the rescue – locate good sushi places nearby, settled on Natsumi Sushi Bar, was a few blocks away on the 50th St with good reviews.

We got there around 9pm, place looked nice and not too crowded – was a bit sceptical due to the lack of crowds, however menu looked very good and YELP gave it 4 stars, could not be that bad – am soo glad we did stick around!

Got seated in a nice comfy lounge sofa, ordered the King Crab dumplings, Shrimp & Chicken dumplings and a bit of sushi variety, along with my Beer, Nita was sticking to water, unfortunately most of the places here do not carry Shiraz wines – Nita’s fav

Food arrived and it was gooooood, some of the best dumplings & sushi we have had! 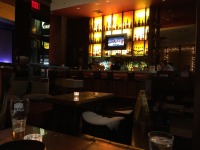 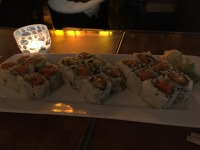 Made our way back to the hotel via Times Square, the place was buzzing, it was around 10:30pm with more people than during the day when we had first visited!

Time to call it a night, great first day.

Have always loved travelling and will continue to pursue this love. Favourite Travel quotes: “Traveling – it leaves you speechless, then turns you into a storyteller.” – Ibn Battuta “The world is a book, and those who do not travel read only one page.” – Saint Augustine
View all posts by dharmeshkalyan →
This entry was posted in Canada, New York, Toronto, USA. Bookmark the permalink.