Posted on January 1, 2012 by dharmeshkalyan

Nita was feeling much better today – no more upset tummy, had to rush everyone and got out to breakfast around 9:30. Had hired an AC taxi to take us around Bandra, Juhu and abouts – we had hoped to leave by 10….it was more like 10:30 by the time the car arrived!

The car was bigger than Mumbai taxi’s, so definitely more space for the 6 of us (Nita’s foi/fua were with us) to squeeze in! First stop was Hari Om murti’s, we needed to pick some Murti’s for our home mandir and needed to start browsing. On the way there, we stopped at Aakaar, another murti gallery. They had some great pieces, however they must be totally catered to the high end, prices were beyond us! Hari OM was better in its range, however the browsing was taking too long – fua was getting bored, back in the taxi, headed towards Juhu for lunch – the place where the driver suggested did not seem like much, luckily Chetan had suggested a good seafood outlet in Juhu – Mahesh Lunch, asked driver to take us there – a bit further from where we were in Bandra, but definitely worth it. 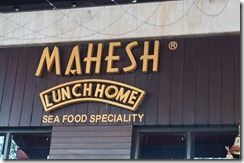 Ordered Lobster, King Prawns & Fish, Neha and Pooja had Fish-n-Chips. Lobster was very nice, however the best was the BALTI Fish – a goan dish! Perfect with a chilled Kingfisher. Whilst in there, Pooja remembered she had left her toys in the taxi and was getting all upset over it, rang the driver – he promptly dropped it off at our table – service!

Kids wanted to see some bollywood stars, no luck yet, so decided to view some of the celebrity homes in the area – saw Amitabh, Jitendra and Raveena Tandoons places. Amitabh has two bangalows there and rotates between them!!

No stop to Juhu is complete without a stop at the JW Marriott, headed there for afternoon coffees. The place is magnificent and very posh. Kids had ice-cream, we settled for coffee and cakes, nice but nothing to rave about – bit disappointed, was expecting more from this place!! We still had not made any plans for our New Years celebration, checked out their new years festivities, unfortunately the only family friendly event was a buffet, dancing areas were off limits to kids – had to find something exciting for New Years, still had 2 days to figure it out!.. think Dharma think!

Headed back to our taxi, it was already close to 5pm, asked the driver to drop us @ Hari OM (Murti shop) @ Mahim , and foi/fua continued their ride back to the hotel.

We spent close to 1.5 hours selecting the murti’s, price seemed a bit high, so needed to confirm with mum if all was ok – am glad I did that!!
By the time we left it was close to 7pm, on the way back stopped over @ the Atria mall – it has a Rolls Royce showroom there!! Rang foi/fua to update them on our whereabouts – they were too tired/full and decided to take it easy in the hotel.
Mall was ok, but the food court was crap – half the shops had closed down.

Took another taxi and headed to Chowpati – wanted to try Cream Centre. It was close to 8:30pm, and the queue was massive, was a 45 minute wait, decided to hang around. Finally we got in, ordered some chaat which were very tasty, for mains a Noodle dish with stuff (cannot remember what, saw it on the table next to ours and asked the waiter for the same), also got Paneer masala and roti (Neha and Pooja loved that). Food was amazing, the noodles were simply amazing – and it was all VEG – why can’t we get similar veg varieties back home!! And Finally had to have the sizzling brownie!

Had lots of rice left over, got it packed up for the kids waiting outside, it is always heartbreaking to see sooo many kids on the streets with little to no food, this time around they were also asking for our bottled water!

Have always loved travelling and will continue to pursue this love. Favourite Travel quotes: “Traveling – it leaves you speechless, then turns you into a storyteller.” – Ibn Battuta “The world is a book, and those who do not travel read only one page.” – Saint Augustine
View all posts by dharmeshkalyan →
This entry was posted in India, Mumbai. Bookmark the permalink.