Posted on December 7, 2011 by dharmeshkalyan

Landed into Delhi at 12:30 am (7th Dec), getting out of the plane, we could smell India “bharat ki khusbhu”. Walking towards immigration, a cart was assisting an elderly lady and offered to give us a ride as well (Pooja was in my “GODI”), cool, we were one of the last to come off the plane, but taking the cart, we almost came to the front of the queue.

Delhi airport is quite impressive, compared to Mumbai (well the one I saw 5 years ago).
The immigration lady on the other hand was not that impressive, looking super tired and couldn’t care less of any one. Passed that without issue and off to buy some Alcohol for the relatives in Navsari.
Tip for anyone flying to India, buy your alcohol on arrivals in India, it is cheaper than other places (well Cheaper than Brisbane and Hong Kong)

Whilst waiting for luggage, got Nita to get our liquor permits for Gujurat, interestingly no one there knows anything about any such thing! Checked with customs, information desk and immigration, no one understood why we needed it!! Have let that pass for now.

Came out of customs with no issues, and so glad to see the guys from Swati hotel awaiting our arrival (thanks to Chetan for organising this, made it very easy for me)

Had to ask them to wait – needed to get myself a 3G USB Modem. Airtel booth was there and was able to organise this on the spot. The same thing would take 24hours if done outside of the airport!

Getting outside of the terminal, the weather was cool, however was surprised to see soo much SMOG at that time of the night @ 1.30am. The guys from the hotel had a small car and I had 3 bug luggage pieces, I offered to get a taxi as well, but they were confident the baggage would fit…. and too my astonishment, they made it fit – after lots of pushing and squeezing.

Out hotel – Swati Deluxe, is located in Karol Bhag, got there at close to 2 am, we promptly checked into the room. We also had an option for a mattress if required, however chose to go with the one KING size bed, it easily accommodated us all,  changed and were off to bed in no time.

Was good to get a good nights sleep, were up by 8am, had to warn the kids again and again of not drinking from the taps. Only use bottled water.
They were a bit scared of all these precautions, they were also amazed at the bathing methods, bucket of water rather than shower – the hotel did have a shower, however due to its height, we decided to use the Bucket system, explained to Kids how we used to bath this way in Fiji when we were young – this method definitely saves water – Neha actually preferred this.

Breakfast was in the restaurant next door. This is a great little place, a range of Dosa’s, Idli, cereals and other options which I did not try. Kids had cereal, myself and Nita went for Dosa’s – yummy Dosa for breakfast.

Back at the hotel after breakfast, Nita organised the bag of clothes requiring washing, most from the last 4 days in Hong Kong. Left that with the BOY on the floor, he assured us we should have that by 5 pm same day – and it was delivered accordingly.

Locked all baggage and headed out. Found out the nearest market was behind the hotel a mere 5 minutes walk.

Neha and Pooja were great, I guess we had forewarned them of what to expect in India, the dirt, poverty etc, but we were surprised on how well they were handling it. Although some comments they made were good, “Papa why is everyone using the car/bike horns soo much” had to explain on how they were warning others of their presence.

Had a short stroll through the markets and were already being haggled by many persons on coming to shops etc, Kids could not understand why sooo many people were approaching us to get into their stores, why were we so special!!

Found a good hair saloon, got Neha & Pooja in for a shampoo and cut, had promised Neha a hair cut to remove the crazy knots in her hair. She was soo excited to get her shampooing under way, and Pooja was not too far of, why should she be left out of the pampering 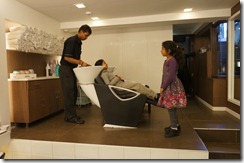 (Neha and Pooja getting their hair shampooed & conditioned)

The hair cutting was next, 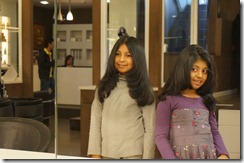 Following that, we wanted to head off to Conought place for a good lunch. Took an Auto rickshaw to Conought Pl, this was the first time the kids rode that, and loved it. Again the beeping of horns was evident to them.

Once at Conought Pl, we made a quick round around a couple of blocks and came across QBA. Turned out to be one of the top Bar Restaurants in Delhi. Kids were in luck, they had Thai Red Curry on the menu. Food was awesome.

Back to Hotel after lunch, Nita was not feeling too well and having a bad headache with some stomach crams. Decided to stay @ hotel for the afternoon and take it easy. Around 6pm took the kids around to Karol Bagh markets to McDonalds(Nita was feeling a bit better but not 100%, so decided to rest the evening).  Kids had the standard nuggets and chips, I went for the Chilli Chicken wrap, loving the Indian menu. The BIG Mac here is next on my list, instead of beef they have two chicken patties!!
Ordered takeaway Chilli Paneer Wrap (@ McDonalds!!) for Nita, and on the way passed a Great pastry store “Anjlika”, this is as good as the cheesecake shops in Brisbane, but better. Got a Soufflé and Choc Brownie!!
Kids enjoyed avoiding oncoming bikes and scooters on the way back to hotel. Always finding something funny on the streets, we started counting the different types of horns we heard, Pooja tried to imitate the sounds of the crazy/funny ones. Pooja kept identifing poor kids on streets and how we had to give them the old clothes we brought with us.

Back at the hotel, the review for the Chilli Paneer Wrap was great, and the desserts were awesome.

Pooja and Neha played the rest of the night with the toys from Disney. Called it a night.

Have always loved travelling and will continue to pursue this love. Favourite Travel quotes: “Traveling – it leaves you speechless, then turns you into a storyteller.” – Ibn Battuta “The world is a book, and those who do not travel read only one page.” – Saint Augustine
View all posts by dharmeshkalyan →
This entry was posted in Delhi, India. Bookmark the permalink.