Posted on October 7, 2018 by dharmeshkalyan

Early start today, the hop on off bus pass (purchased yesterday) was still valid till 10:30am (pass is valid for 24 hrs), we decided to use that to complete Kensington Palace – Diana’s home. Quick breaky and we were all out on the road just after 9am. Another cold day.

First on the red line Bus to the Marble Arch stop to switch lines to get to our destination. 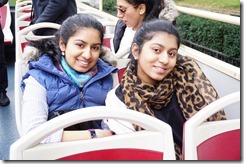 On the way to Marble Arch, got lucky with the change of guards parade. 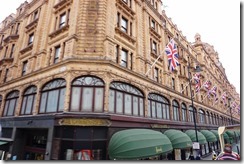 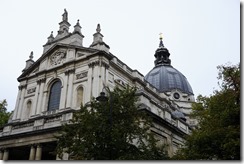 Arrived at Kensington Palace stop, all off the bus, now a stroll through the parklands to reach the palace, opportunity for more pics. 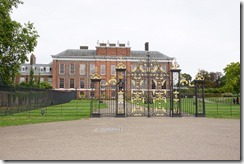 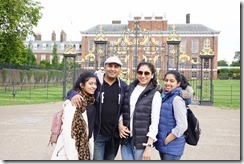 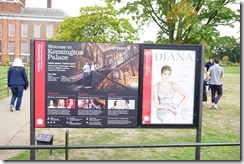 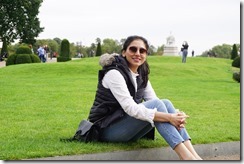 Kensington Palace done, not as impressive as other palaces, we were not soo impressed by it, or maybe we were expecting a lot more???
Now for a 25 minute walk to the Gloucester Road underground station, we were headed to little India in Alperton.

Along the way to station, passed some amazing streets…

At the station took the Piccadilly line to our next stop Alperton. As the stop neared, more and more Indians boarded the train, yep we were headed to the right place! The Alperton station stop had the same feel, a lot of Indians.
On to Ealing Road to find the little india town, unfortunately none of us knew exactly where this was, had to ask a store attendant for directions on which way we should head, north or south!

Made our way North as advised, and soon came past the Shri Vallabh Nidhi Mandir. Wow a nicely architected mandir, similar to what can be seen in India!

We went inside for darshan, and the same detailed sculptures were on the inside, very nicely decorated.

Headed further north on Ealing Rd, finally coming to a row of stores on both sides, lots of Indians around the place and lots of food outlets, groceries stores, etc.
Ladies headed to an Indian Grocery store, to pickup Tandoori Mix, apparently London mix was very nice!!
Coincidently, the store that they went to was called “Nita Cash n Carry” !! 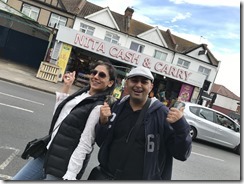 Whilst waiting with the kids, we checked out the Mumbai Local food outlet next door, menu looked great! We decided to make that our lunch spot. Store was not open till 12 midday, no problems, only 30 more minutes to kill off, lets roam about in the town. Ladies had finished their buying, a bit of roaming around and just after 12 midday, we were back at Mumbai local, time for some desi food.

A brilliant vegetarian lunch it was, would highly recommend the Mumbai Local restaurant for veg street food variety. A must have is the Mumbai Masala Chai.

Next to roam about more in the streets, mum had told Nita about Popat store, and to buy some sort of kitchen pan from there, that was the next stop for all!

More shopping by all, next to head out to the Wembley stadium. Even though we could not get in, it would be good view the massive structure. Worked out our route to get there by Bus. Caught the iconic London double decker red bus towards the stadium. Along the way, we passed another bigger Little India town, Will leave that for our next trip!

Arrived at Wembley stadium, a massive stadium it was. Took us a fair bit of walking just to get to the entrance of the stadium, which in itself was so high. 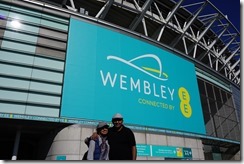 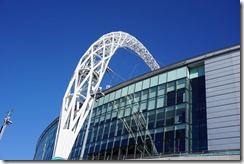 Stadium done, now to the London Designer Outlet mall, directly next to the stadium. We gave ourselves till 4pm to get any shopping done and then to head back to the hotel. 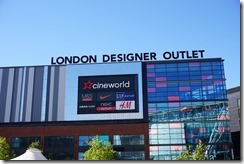 A small bit of shopping for the ladies but nothing too crazy, prices when factored with the weaker Aussie dollar were not that great, in most cases it was more $$$ than locally purchased back home.

Just after 4pm, we all headed back to the hotel, via the tube. Arrived at our hotel just after 6pm, giving all enough time to take a break, refresh and then head out to dinner at Hakkassan, booked for 8:30pm. With our large group size, we could only get 3 separate tables of 4, booking a large table of 12 required us to pick one of the banquet menus, which was not to our liking – this is something they should improve on!

The Hakkassan restaurant in Mayfair was amazing, good food, but could not beat the Mumbai Hakkassan. Girls did enjoy the food here, highly recommended. 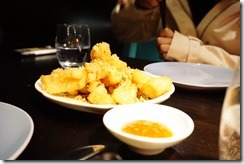 It had been another big day, tomorrow was Madame Tussards and the London Eye.

Have always loved travelling and will continue to pursue this love. Favourite Travel quotes: “Traveling – it leaves you speechless, then turns you into a storyteller.” – Ibn Battuta “The world is a book, and those who do not travel read only one page.” – Saint Augustine
View all posts by dharmeshkalyan →
This entry was posted in London, United Kingdom. Bookmark the permalink.