Early wake up today,  our car come on time and luggage was all loaded. Farewelling mum & dad was hard, especially for mum herself! Lots of hugs for Neha and Pooja. It had been so much fun with mum and dad, this was hard. Farewelled them and we were off just before 6:30am. Navsari had been amazing, such a small town but having a home away from home is nice and grows on your so quickly.

Arrived in Mumbai around midday, and then it was the traffic, another hour and it was around 1pm we reached Juhu. Nita and Pooja decided to get out at Tea Villa cafe, whilst I checked in at Novotel, no point all going there. They could grab a bite to eat and rest a bit – was not sure if Novotel rooms would be available or not – knowing my luck. 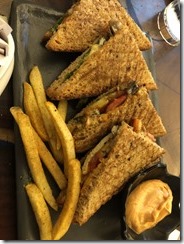 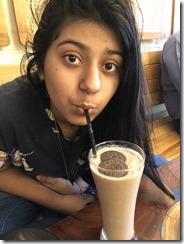 Checkin process was very lengthy at Novotel, it was another 30 minutes before we got the room keys, and it was not because the room was not available, they were simply SLOOOOOOOW – it was pathetic. But there is always a bright side to any problems, whilst waiting in the lounge area, Neha spotted Sunny Leone walk in. She quickly caught up to her and managed to get a selfie! Neha was totally on cloud 9 post that – she finally managed to snap a selfie with a celeb!! 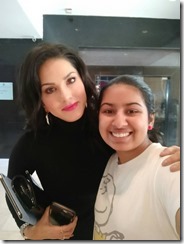 Luggage all stored in our room, now to head out and catchup with Nita and Pooja. Next stop was Colaba markets, Pooja had seen a Michael Kors (imitation) bag there and not sure why we had not purchased it then, had promised her we would do it this time. During the OLA ride there, Neha could not stop about how she met Sunny and how nice she had been to her. Pooja was a bit upset with that, and wanted to see a Celeb!! Unfortunately that was something I could not influence

Traffic was terrible and it was over 1.5 hours before we reached Colaba (after 3pm), located the market store selling the branded bags. Pooja got the bag she wanted, Neha also found something she liked. Bag shopping done, now for another OLA to an  othorpedic place to get special in souls for flat feet – I needed these. Same thing back home are over $300 AUD, in Mumbai, it was less than $20 AUD.

All shopping done, now back to the hotel to relax a bit before heading out to JW Marriott for dinner – that was the best chance we thought that Pooja had of spotting celebs.

In the Lotus Cafe Buffet, Pooja was hoping for some celeb spotting!! Today was her night, was not long before they had spotted Dabboo – a famous bollywood photographer (I had no idea who he was), but the big sighting was Sonu Sood! Pooja could not believe it. 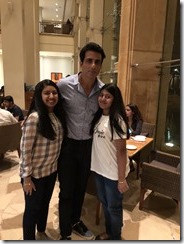 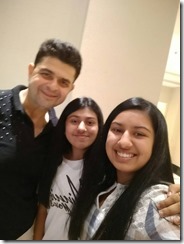 He was very nice and obliged with a pic.  He was there with his family and we were surprised when they got seated directly next to us – the look on my girls faces was priceless!! Ofcourse I had to take a pic with him in the background

They were the only 2 celebs we met that night, and Pooja & Neha were super happy. Finished with a lot of desserts.

Relaxed start to the day today, our flight was departing around 3:30pm, so no rush. Lots of time for a relaxed breakfast.
Checkout process was quick, unlike the check in process! Luggage count all good, now to wait for our OLA cabs.

The two OLA cabs arrived on time and we were on our way to the Mumbai international airport. Had heard lots of positive things about the new Mumbai airport, and it did live up to it. The place looked good.

However the Check in Process at the airport was very very very slooooow! I would rate it as the worst in the entire trip, the process took over an hour, simply waiting in the check in queue

Finally all checked in, through immigration and time to get something to eat. Nita opted for desi – turned out to be the BEST bhel puri she had in this trip

Neha Pooja opted for Noodles, which unfortunately were not that great

Time to board our flight to Dubai. 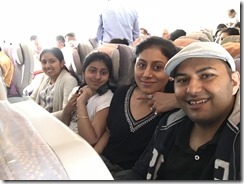 Reached Dubai on time (local time 5pm), now a 5 hour layover till the next flight. 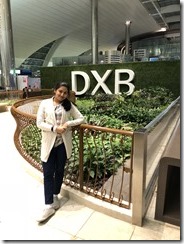 What else to do, than Duty free shopping! Couple of hours killed there, next to get some dinner and then it was onto our final flight – back to Brisbane.

This was a long one and since we were all quite tired, all got a good few hours of sleep.
Arrived in Brisbane safely, Bhavik was there to collect us and we were home by 8pm on the 20th of January.

It was the end of a great holiday – 6 weeks! Now back to reality

Sad these holidays were over but the next adventure is just around the corner, heading to Europe with Friends in September – counting down to that

Signing off till the next trip!

Have always loved travelling and will continue to pursue this love. Favourite Travel quotes: “Traveling – it leaves you speechless, then turns you into a storyteller.” – Ibn Battuta “The world is a book, and those who do not travel read only one page.” – Saint Augustine
View all posts by dharmeshkalyan →
This entry was posted in India, Mumbai, Navsari. Bookmark the permalink.