Early morning start today, scheduled time was 6:30 am to leave the room and head out by 7am. Wanted to miss the outgoing morning traffic and get into LA before the afternoon Peak.

Vik had already organised for the bell boy to take the bags down – two trips for him, we had too many bags!! We were worried about it all fitting in the van, after all we had close to 16 pieces of luggage. The bell boy did a great job in fitting all the pieces in.

(Van fully loaded with all our bags)

Whilst Vik was organising the loading of the Van, I was completing the checkout process for both the rooms, at 7am we were all set and ready to farewell Vegas! This has been a good stay!

Exiting the Cosmopolitan car park, we made a couple of incorrect turns, finally figured it out and managed to get on the freeway, onto Interstate 15. Looking back in the Van, was surprised to see most of our passengers sleeping already, we had only been travelling for about 30 minutes! They had it so nice.

The VEGAS buildings were soon gone and the harsh dessert landscape was all around. 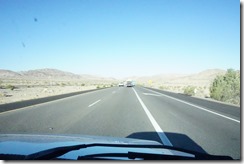 Vik had to hold on to the steering tight, the freeway had crosswinds and our Van being big with a large surface area was sliding around a fair bit. He did very well to handle the slide.

Around 8:30 am, we were nearing our breakfast stop, the famous 50’s style Peggy Sue’s Diner. Saw the sign only 9 more mins!

Finally got there, the place had such a nostalgic feel to it. 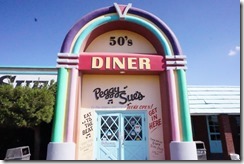 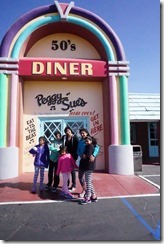 Breakfast was good, they made the most amazing pancakes, even Aaria who normally never eats out was eating these! And the Milkshakes were sooooo yumm! Breakfast with Milkshake goes so well.
Would highly recommend this stop to anyone doing the drive between LA & Vegas.

Back on the road, the freeway was so straight, the drive could get very boring if not for the company in the car.

(straight freeway with not bends for miles and miles ……. ) 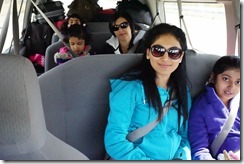 (Pooja would not let her unicorn out of sight)

Around 11am we were entering LA, we were like wow we did it so quick, did not realise the traffic was going to cause a further delay. First stop in LA was Meeta’s mama Chandrakant(he also happens to be my mama!).
Following the GPS, we took our first exit from Freeway we were on, the exit joined to another freeway, then another exit to another freeway and again, this continued for a further 2 – 3 exits, each exit putting us on another freeway, we could not get over the number of freeways this place had. And all the freeways were BUSY!

Finally arrived at Chandrakant Mama’s place. It was good meeting Chandrakant mama for the first time. He knew our entire family and so much info about us all. Even remembered everyone’s PO BOX numbers in Fiji, so impressed with his memory! Mama and Mami took us out for lunch at the local Pei Wei Chinese. Was a short drive to the place.

Mama knows his chinese, some very nice meals he ordered. Was a very good lunch. 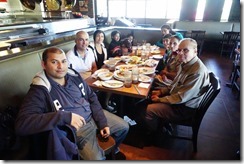 Drove them back home, by the time we reached their place it was already 3pm, I guess we were going to meet peak hour traffic. Farewell’d mama and mami, now to Anaheim.
The drive was around an hour to get to our Hotel, the Holiday Inn on Walnut St. Again a whole lot of freeways, until we finally took the Anaheim exit, onto Katella Drive, it was very touristy with loads of restaurants and hotels, all serving the Disneyland across the street. Street was nicely landscaped with rows of Palm trees. 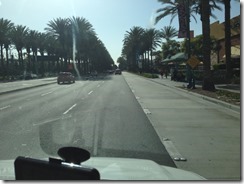 Finally made it to the hotel, we were directly behind Disney but unfortunately not in walking distance. Got into our rooms, and what a let down, Cosmopolitan @ Vegas had spoilt us. Still not too bad since we will only be coming here to sleep, the next 3 days will mostly be spent at Disney which the kids were all very excited for.

For the evening we decided on Cheesecake Factory, which we had seen on Katella Ave. Dian had missed out on this in Vegas on the last day, so it was time to make it up to him – also no one was saying no to Cheesecakes!

Out of the hotel around 6pm, it was COLD outside, not expecting LA to be so cold. First stop McDonalds, time for Aaria and Pooja to be fed. McDonalds being directly opposite Disneyland entrance, we left the ladies and kids @ McDonalds, whilst me and Vik walked across to Disney to purchase the tickets for tomorrow, this would save us lots of time tomorrow. Even at this hour of the night there was a small queue at the Disney ticket office, bought our Southern California CityPass, which gave us 3 day Park hopper tickets to Disney and California Park, Seaworld San Diego and Universal Studios entry. Also hired a stroller for Pooja for Day 1 of Disney, had to do the same in HongKong disney! Back in the VAN, next stop Cheesecake factory. Parking this large Van in tight spaces was a challenge, Vik did very well with that, it did require me to get out and guide. We had happened to park next to a Subaru WRX which made our VAN look even bigger.

(for size comparisons, our VAN next to a WRX)

@ Cheesecake factory, had a wait of around 30 minutes if we wanted a table or we could go directly to the bar area and use the high tables which were empty. Took that option and soon we had ordered 6 cheesecakes! This was dinner! Vik also suggested a bowl of chips, apparently it is good to mix dessert with some salted chips. Unfortunately no food pics taken, we were all too tired, just wanted to have something to eat and go rest for the next 3 big days. Cheesecakes were very good, and surprisingly having the chips balanced out the sweetness well.

Headed back to the hotel, get as much sleep as possible, tomorrow was an early start to make the most of Disney.

Have always loved travelling and will continue to pursue this love. Favourite Travel quotes: “Traveling – it leaves you speechless, then turns you into a storyteller.” – Ibn Battuta “The world is a book, and those who do not travel read only one page.” – Saint Augustine
View all posts by dharmeshkalyan →
This entry was posted in Los Angeles, USA. Bookmark the permalink.