Early start today, had to cover Hoover Dam & Grand Canyon and make it back before dark, did not want to be driving at night. We all had agreed to get out by 7am.

Woke up @ 5:30am, got the kids up, ready and quick breakfast. Knocking on the interconnecting room door around 6:30am, Vik was making sure we were up and ready. All good today, we all were down in the lobby by 7am, got the Valet to get our mini-bus, Nita & Meeta was impressed that we were using the valet service, they were thinking “wow it must be a nice big car!!”.

They could not believe their eyes, when the Ford E-350 pulled up, they were like – what the!!!

“ah Khataro ma apne jawana”!!! They could not stop laughing at the size of the VAN/truck and how we were going to drive this big thing! Kids on the other hand were excited to have such a big van with loads of space.

Vik took the drivers seat, I was co-pilot, making sure we were going the correct way and staying on the RIGHT side! 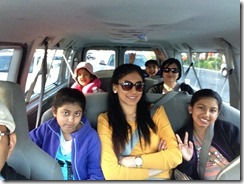 We were glad to be out on the streets before 7:30am, streets were empty which gave Vik more confidence to drive without the pressure of traffic. Made all the correct turns and were soon on the freeway (US-95) heading to Hoover Dam. 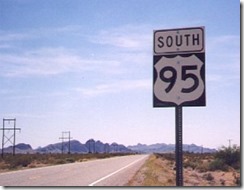 Vik was finding driving this big thing required more concentration than normal, the large surface area was a magnet for crosswinds and causing the VAN to drift sideways, he constantly had to have both hands on the wheel making fine adjustments.
Even with that, it was lots of fun to be travelling in our own space and being able to stop where ever we wanted. Also we now had our own music, something we cannot do without!

First stopover was at McDonalds for a quick breakfast. Coffee again was crap, no surprise there. Back on the freeway, we were seeing some amazing scenery and landscapes.

Getting close to Hoover Dam, we caught our first glimpse of Lake Mead, wow, what a sight. Nita was able to relate to the location, she had been following Varun Dhavan and Shradha Kapoors instagram pics of their upcoming movie shooting – ABCD 2.

By 8:30am, we had taken the Hoover Dam exit, we were doing great for time.
As we made the final few turns to the dam, we came across the posts for the massive Hoover Dam bridge, spanning the Colorado river. This thing was massive, and pictures simply do not do justice to this amazing structure! 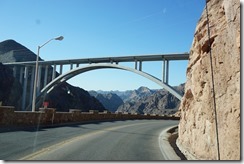 Parked our VAN in the Public car park, Vik did very well to navigate the narrow curved ramps, finally time to get out, all were excited to view the magnificent Hoover Bridge & Dam. 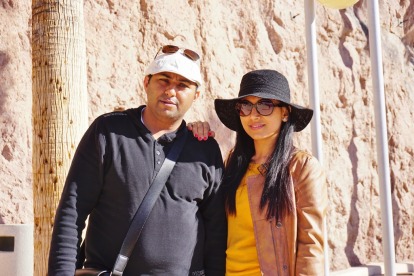 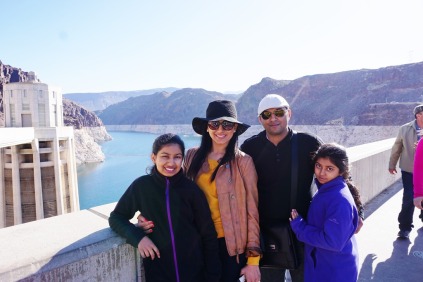 This is an amazing structure and when considering it was built in 1935, it is even more impressive!! So many years back and such a massive structure, US just amazes me! We were all wowed by the sheer scale of this Dam & the Hoover Bridge. This was well worth visiting!.

Time to head back, next stop the Grand Canyon West.

Over the Hoover Bridge, we were now entering the state of Arizona! 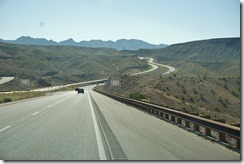 The drive on this freeway very scenic and quite enjoyable.

Nita took a couple of short videos of the scenic drive.

Was not until 11:30 am, we arrived at the Grand Canyon West stop that was managed by the Skywalk company (I think). Entering the park required us to leave our VAN behind, purchase a ticket for each person and then board their buses to get to the Canyon and other attractions. Well these guys had the monopoly so nothing we can do to avoid that. The tickets packages were not too bad, they provided three stops and also included lunch for all.

First stop was the Hualapai Ranch, this was a western town replica and was serving Ribs & Chicken roast for lunch. Getting out of the bus, it was COLD here, was funny to see Pooja wearing a Beanie at midday on a day with clear sky, but it was soo required ! The old town replica was great, with a Bank, Jail, Post Office and the likes. However we really wanted to see the Canyon and there was no sight of that 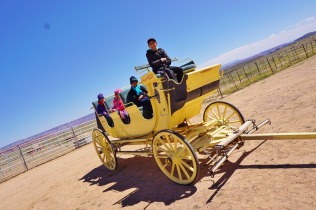 We decided to have lunch at the Ranch, the Ribs were the best I have had for a very long time. Pooja who normally would not touch it, was getting right into it, she was absolutely loving the Ribs. Nita had the roast chicken, this was good but no where near as good as the Ribs.

On to the buses that drove past every 10 minutes, next stop was the Skywalk. Being the skywalk, I knew the Canyon was there, thinking it was going to be a long drive we all settled in our seats comfortably, however just after a couple of minutes we were seeing an amazing sight, the Canyon right before us! It was wow!!

First one near the ledge was Vik, he wanted to see how deep the Canyon was, but his steps were very small ensuring he had enough grip! At one stage I was holding on to his belt so he could lean a little bit closer to the edge!! 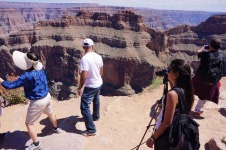 Enough of the selfies, time to do the skywalk, Neha and Pooja stayed back with Meeta & Aaria. Getting on the skywalk, we had to cover our shoes with protective shoe gloves, avoid scratching the glass, also no cameras, phones or backpacks were allowed on the walk, which was a bit of a bummer, we were unable to take our pics, other than using their photographers.

Getting onto the skywalk was initially a bit nerve racking, after a couple of minutes though,  it was actually fun, the view from there was great, and seeing directly down was so cool.

The walk was great, what was frustrating was the inability for the three photographers to get to everyone who wanted their pics taken. It took around 30 minutes before we finally got the attention of one of the photographers, and all we got were a few quick snaps only!! Was very disappointed with that part of the skywalk, afterall, the pics are the memories we would have, they should have had a couple more photographers for these busy periods.

Time to get off the skywalk, caught up with the rest of the crew. Headed out to the bus for the final stop Eagle Point, which was apparently offering a better view of the Canyon.

And it was! Eagle point had an almost 270 degree view of the Canyon. 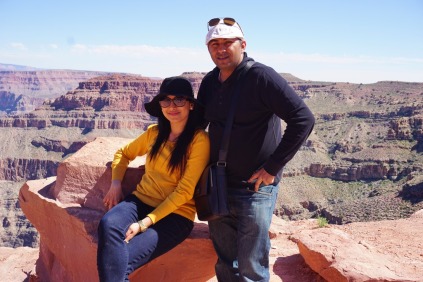 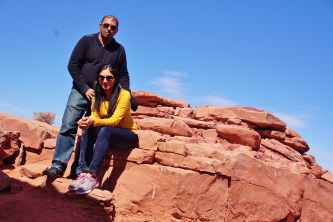 It was 3pm, time to headback to our VAN, we had done a lot of good sights of the Canyon. Got everyone loaded and headed back to Vegas. We were all a bit tired. Did not take long for most of the passengers to nod off.

Nita took some more short videos of the drive back …

Arriving back at the hotel, handed the car to the Valet, plans for the night were to head to Caesars Palace, Pooja did not want to walk, so I suggested taking the VAN, by this time Vik was already tired of driving all day and was not too keen on that option. He had a better idea, he checked with Valet guys if we could get a LIMO to take us around for an hour – this is something we had discussed lots back in Brisbane but had slipped my mind, am glad Vik remembered. We got the largest Ford Limo on the strip (well that’s what we were told) for an hour. We had 30 minutes to get ourselves freshened up and back at the lobby for the limo pickup at 6:30pm.

Limo was there at 6:30 sharp, and it was a BEAST, very BIG. Kids could not believe it, they were going for an awesome ride. 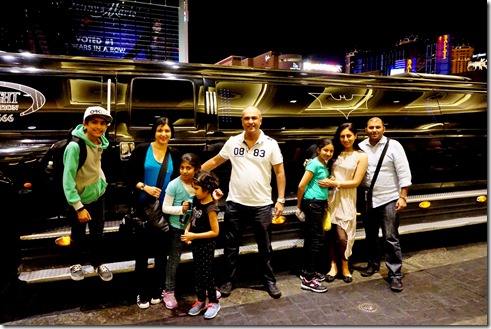 The limo ride took us around the strip for an hour, but most of the time, we were not looking out at all, just enjoying with the kids, having loads of fun. Limo dropped us off at Caesars Palace.

We headed to the buffet which Veena masi had highly recommended, and had to queue up, approx wait 30 minutes. Got a couple of beers to keep us company, whilst waiting, Ladies headed to the bar, cocktail time and ofcourse selfies 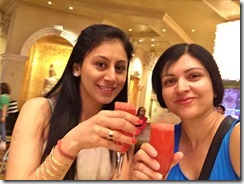 After waiting for 30 minutes, the hostess called us to explain the costs for the buffet, till this point we had no idea about this, turns out this place charges everyone who enters, Pooja and Aaria were not going to eat, and this was equating to a further $130 USD for those 2, the total cost for group was coming at $640 USD! Hmmmm, I was not expecting the cost to be this high !! We promptly exited and headed for other options.  Ended up eating at the Caesars food hall, where the options were vast and all kids were happy. We had hoped for better, however with kids, there are lots of compromises.

Next was to explore this Resort, loads of shops, café’s all with a very Roman feel to it. 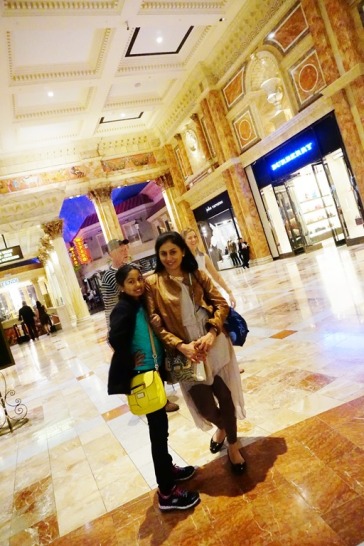 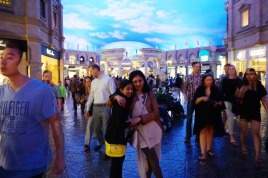 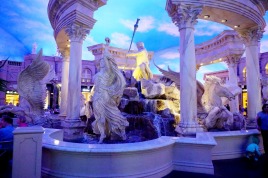 Got out of Caesars Palace and walked back to Cosmopolitan. Were lucky to view the Bellagio fountains on the way back – which we have viewed everyday from our rooms! It was however good with the music. Pooja and Neha were very tired by this time, headed back and we all crashed! What an awesome day

Have always loved travelling and will continue to pursue this love. Favourite Travel quotes: “Traveling – it leaves you speechless, then turns you into a storyteller.” – Ibn Battuta “The world is a book, and those who do not travel read only one page.” – Saint Augustine
View all posts by dharmeshkalyan →
This entry was posted in Las Vegas, USA. Bookmark the permalink.