Posted on September 19, 2013 by dharmeshkalyan

Early morning start, finally after months of waiting today was the day. Dad dropped us off at the airport around 7:30 am, flight on-time and check-in was very quick, we were thru in under 5 minutes, very different from the experience a couple of days back when we dropped off Neha!
Had a quick breakky in the departures lounge and then it was on the plane. Had not seen our boarding-cards till we were in the queue and only then realised we were seated way way way towards the back, row 74! Nita was hoping it was not near the toilets, hmmmm the aromas….!?! We were on the 2nd last row from the back, luckily it was not the toilets there….. phew relief!

The flight had a quick stopover in Cairns, weird that we all had to get out of the plane and then re-board in an hour! What a waste of time.
The long haul leg was next, back to our back row #74. Lunch service was shocking, by the time we got lunch it was past 3pm, flight had taken off @ 9:30 am (BNE time) and we were having the rumbles in the tummy!  Being in the 2nd last row meant we were served towards the very end by which time they had run out of the chicken option! The hostess more than made it up by offering us Business Class meals, they were very good.

Flight landed just after 6pm (HK time), by the time we were out with our bags, it was already 6:45pm. In the arrivals hall, waiting for us were Jayesh & Priya, after booking this trip months in advance, finally the holiday was all happening. Found out from them, for reasons unknown their flight had departed over an hour earlier (lucky they were at the airport early) and they had been waiting for us for over an hour!
All on the airport express train to Kowloon – lots of memories flooding back from our prior trip with the kids!

The train ride was just over 20 minutes and it went by quick – lots of catching up to be done between the 4 of us. From there it was on to the complimentary hotel shuttle from the Kowloon station ….. that shuttle should be renamed to the Roller Coaster!! We had the craziest driver who for some reason was trying to get to the hotels in record time!
Somehow we did manage to reach our hotel: Park Hotel in one piece, hotel was not as big as the Holiday Inn, but still nice and clean.

Priya was well organised with printouts of all bookings, she took charge of the checking-in process, got our rooms sorted, both next to each other on the same floor.
By 8:30pm we were all out on the streets walking to Gaylord Indian restaurant. Walk was just over 10 minutes, not too bad, however the ladies were in lots of distress, they had decided to wear heels and their feet were killing them!! Thank god for the boys flats!! 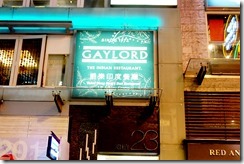 Got to Gaylord, lucky not tooo busy, got a great table directly opposite the live singers, coincidently this was the same table that we had on our last visit with the kids!

We were quick to get the orders in, everyone was starving! 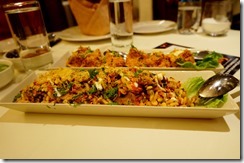 Nita & Priya were on to the Mango Lassi, us boys could not resist KingFisher beer (typical us!)
During all this eating and lots of drinking, the live singers kept provided some great tunes. Wasn’t too long before we were requesting songs. Also there was a big group of diners requesting songs and at a point they had a couple dancing along. Did not take long for Jayesh/Priya to hit the floor and we had to follow, could not let the team down. Was a bit crazy, as literally there was not enough room , just a small area between the singers, and the large of group of diners…. was interesting and lots of fun. 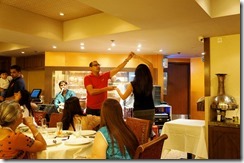 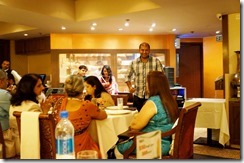 It was a great first night.
(Nita missed you on the night Simz!)

By the end of it, girls were feeling the effects of jet-lag, made our way back to the hotel around midnight. A great evening