Posted on January 6, 2012 by dharmeshkalyan

1st day of the new years, and we all woke up soooo late!! Just lazing around it hit us all, today was my last day in India, sad …. girls were getting a bit emotional realising that today was it, however we still had the entire day together. Had some breakfast then started some packing up for us all (Nita was heading off to Navsari tomorrow, she also had to get her stuff sorted).

Just fooled around and finally decided to head out for lunch @ 1pm – headed to the Italian place above INOX again – we had seen two young girls sleeping without parents on the streets the other night and Nita had wanted to give them blankets – I guess it struck a cord with her, as we also had two girls of similar age! (in fact the poor girls were younger).

As the taxi took off, asked him to make a detour via Hera Panna to pick up some McDonalds for Pooja. Am so glad we took that detour – required the taxi to take another route to INOX we had never used before, and on that route, stood out proudly Ambani’s amazing new residence! simply amazing the size of it! Took another detour to view his place from up close, has to be seen to be believed, a family of 4 reside in this 20 storey high rise HOME, complete with a HELIPAD. 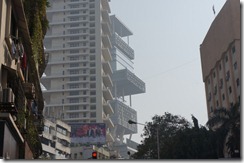 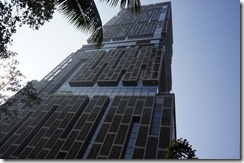 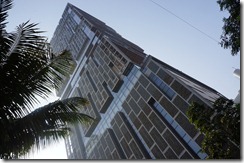 Whilst taking these photos, the security guard from within the gates told me to stop taking pictures, by then I had already gotten a few, got in the taxi no worries, another security personal was taking the rego number of our taxi  – these guys are full on, must be keeping an eye on everyone. Would have loved to have a quick peek inside – will leave that till the next trip.

Got to INOX around 2pm , however no sign of the two little girls (from the previous night), no worries we will find them later, had lunch @ Spaghetti Kitchen, ordered some Pasta and had a great lunch there. 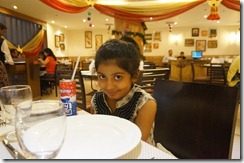 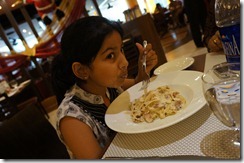 Next was time for Gelato, again in the Spoon food court in the same complex. 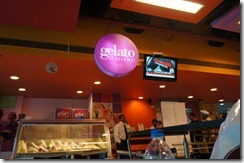 By the time we got out of there, it was close to 3, decided to head to Colaba causeway and roam the markets, and if lucky find some shoes for the kids. No luck with the shoes, however all the girls got lucky with watches!! Soon it was 6, had decided to have dinner at Hotel Status – a very good veg restaurant near INOX which we visited in 98. Got there ok, however the queue was loooong, wait times were close to one hour and people were happily waiting – time was one thing I did not have much off, had to be off to the airport around 9 – 9:30. Told the driver to go past INOX one last time then to a Chinese restaurant in Nariman point. We got lucky, one sister was there, gave her the blankets and told her to share it with her sister – they are sooo hardened by the streets, there was hardly any emotion, just a “acha”!!, am not blaming them, just impossible to imagine our kids in this situation.

As the taxi pulled up to that Chopsticks Chinese place – realised it was closed today!! Luckily few doors up, there was another Chinese place, looked good, took a chance there. Ordered some wantons and 2 chinese dishes. The Wantons were superb, however the others were nothing to rave about. Still due to time restrictions, were not complaining – the service was quick.

Back at the hotel around 8, firstly settled my hotel account – had to make sure Nita did not have to worry about all these tomorrow on check out. Confirmed again with Manga, on Nita’s transport.
Back in the room, finalised my packing. Dipesh (Chandrakant kaka’s son) had arranged a 4WD to drop me off to the airport, he was also coming to accompany Nita and kids back to the hotel at night.
Pooja had visited the toilet twice since our return and was having some loose motion – We decided it was best for them to all stay in the hotel – Dipesh would be dropping me off anyway, so no need for them to stress – if Pooja needed to go to the loo on the way, it would cause major problems!

Dipesh came around 9, he was fine with coming alone – five years back on our last trip, he dropped us both at the airport, this time it happened again!

An emotional farewell – Pooja was fine, however Nita and Neha were very emotional – finally left Gulistan – will not be seeing my girls again for a few weeks atleast, damn we had a great time!

Ride to the airport took close to 1 hour, lots of new roads being made near the airport, a big change from 5 years back. Thanked Dipesh heaps, then entered the terminal – in Mumbai, only travellers are allowed in the terminal!

Next obstacle was my check-in, my luggage (one bag) was weighed in @ 28kg, I was hoping for a miracle and somehow it did happen. The lady at the Jetairways checkin just nodded, asked if that was it and let the bag thru no questions asked!! I am always travelling Jet Airways now! Rang Nita – she was very relieved, Neha started crying again in the background, talked with her for a bit to settle her down.

The mumbai airport has been done up very nicely now, so much better than what it was 5 years back, infact it has lots more things to do, eat and shop than Brisbane Airport!! Flight was @ 1:50am, had 3 hours to kill, off to the IIFA bar for a BIG Kingfisher and a Tikka sandwich – my last Beer in India for this trip!

Boarded the aircraft on time, however flight was delayed by a further 3o minutes, I had nodded off soon after take off, and in 5 hours, was in Hong Kong airport. Had around 12 hours to kill there, but was still too tired, decided to hang in the terminal, checked in to the Travellers lounge – great place for $50 US, had access to the lounge for 5 hours, included a shower, unlimited food, softdrinks & coffee, plus 8 computers were provided for use – I could finish off my blog there.
Firstly had my hot shower and felt much better, found a computer and begun blogging, two hours into which, I was getting very tired and sleepy. The Travellers lounge also offered private rooms, hired one for 3 hours and was fast sleeping in my own private room, complete with showers, toilets the works – like a mini hotel studio room. The sleep did me real good, felt soo much better after 3 hours.
Was able to finish Day 29 Blog entry from there, then decided to roam about in the airport for a bit.
On to the Qantas flight bound for Brisbane !! Aircraft was not as polished as Jet Airways, well that is sort of expected now! Landed in Brisbane around 9:15am, Dad and Dada come to collect me, had lunch at Mums place, and was back at work around 1pm! Holiday was over back to reality….

Wrap up: Was a great vacation – not to forget too easily. Still missing Nita and Kids, but as long as they have a good time in India with Mum and Dad, I am happy!
Chetan (Kshatriya), thanks lots lots lots, for organsing hotels, trains making it way easy for me!! Really appreciate all you have done.
Also thanks to Paresh Kumar (aka Bhans!!), your blog was my inspiration to do this, cheers mate.

Have always loved travelling and will continue to pursue this love. Favourite Travel quotes: “Traveling – it leaves you speechless, then turns you into a storyteller.” – Ibn Battuta “The world is a book, and those who do not travel read only one page.” – Saint Augustine
View all posts by dharmeshkalyan →
This entry was posted in India, Mumbai. Bookmark the permalink.