Posted on December 11, 2011 by dharmeshkalyan

Early start today, travelling to Amritsar via Train departing @ 6:40 am.

Were up at 5, had already showered the girls at night prior to sleeping, so no need to rush them. Checked out of the hotel @ 6am, Hotel taxi dropped us off @ New Delhi Station, the ride to the station was uneventful, however getting into the station drop off was another matter. Cars were coming in from all directions and was a scene of total chaos.

Got a coolie (porter) to carry our luggage and guide us to the train and correct platform. Am soooo glad we did that, New Delhi station is big, and by no means for the non experienced, especially when racing against time!

Our train was Shane Punjab (Shatabdi is a better express train, unfortunately seats were not available on that). We were seated in II AC, it had coach setting with plenty of legroom. 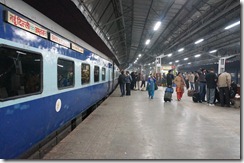 (view of platform, entrance to our train – not the most appealing!!, Pooja already seated)

Train Journey was comfortable, however quite lengthy. Along the way viewed some amazing scenery, I could picture Namaste London on the farms we passed. Could not really take any good pics, the windows were dirty as hell, and the doors to the coach were closed and I was not game enough to open these in a moving train!

Neha and Pooja had been fine, playing with their toys, a couple of minor fights and back into it again. They have already changed their seats 3 times.

(Neha & Pooja entertaining themselves)
For food: Lots of people selling snacks and drinks so no shortage of food, however I was trying to avoid eating & drinking too much in the train, not sure how bad the loo would be!!
Finally at around 11:30, had to bite the bullet and go to the loo, it was an experience to view the tracks passing by beneath, and leaving my personal signature on the tracks somewhere!! What a relief it was.

(a train station on the way, see the stack of snacks this guys is selling)

Train was 45 minutes late getting into Amritsar, reached at 3 pm. Got a Coolie to take luggage to taxi ranks. Took the Auto to the Hotel. Auto’s in Amritsar are bigger than the Delhi counterparts, this one had a luggage area (boot) as well, plus was soo wide, must have been the luxury version!

We were staying at the Country Inn, this felt like a 5 star hotel when compared to our Delhi hotel. 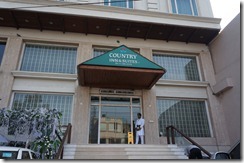 The rooms were very well furnished and sooo clean.
All freshened up and changed to visit the Golden Temple, kids changed into the Indian outfits we had bought in Delhi, 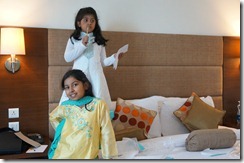 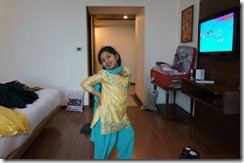 Nita was meeting her Indian Forum virtual friend Jazz (Jaspreet), she arrived at our hotel and both were super excited to finally meet in the flesh!

(Nita and Jess, meeting for the first time)

Jazz is a very friendly bubbly girl, she was great company, and knew everything about where to go in Amritsar – I could throw away my tourist guide! Kids also took a liking to her.

First priority was to get some food (we had not eaten on the train), Jazz took us to a nice Amritsar restaurant , “Bharawan Da Dhaba”, a veg restaurant with super food. Getting there however was an experience – we squeezed 5 into a Auto, I was sitting with the driver with half my butt on the seat the other half in open space, the others were squeezed in the back.
At the Dhaba, ordered Parathas, Paneer & Dahl. The paratha’s were mind blowing, unfortunately I had to settle for rice, my killer sore throat was not letting me eat the good stuff

Surprisingly kids loved the Paneer Makhani – took it for Butter Chicken and preferred the Paneer since it was so soft. Told them the truth only after they had finished their meals!! They did not mind, and went on to eat the same for Dinner as well.

Next was Jallianwala Bagh, a historic sight and very touching when there. 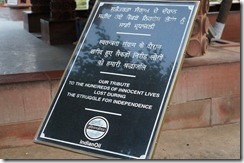 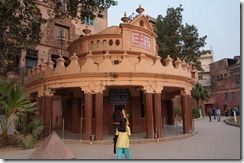 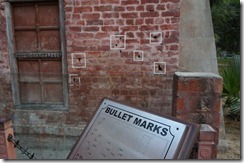 (historic sights @ Jallianwala Bagh, the round structure is the well where many jumped to their deaths!!)

However historic the sight, there has to be some silliness and Nita and Jazz were providing that. Jazz informs us, the well is now fenced on the perimeter due to a few TOURISTS (like us!!) who had fallen IN, whilst trying to get a GOOD view of the well interior!!! Now that would be something!!

(notice the well fenced, and these 4 taking a photo next to a wall where people where killed!!!, show some respect yaar)

The Golden Temple was next and it was soo worth it. Jazz took us at the perfect time of around 5 pm, we were able to see it both in Day light and at Night. It is an amazing structure in the middle of a large pond, surrounded by the Gates. Jazz was a great guide for us, explaining lots about their religion and about the temple and its structures. The perimeter structure has 4 entrances, signifying their acceptance of all religions – this itself says a lot of about their religion.

(outside the perimeter of the golden temple, Neha and Pooja all ready to get in – everyone wears a scarf over their heads)

Stepping through the gates, our first glimpse of the golden temple was mesmerising! It stood out there proudly in the middle of the giant pond. The water in the pond is considered scared holy water. 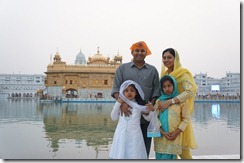 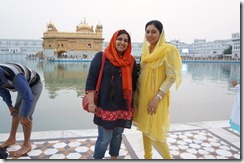 (Pooja having a great time running around the perimeter, this is one place where I felt safe to let her go where she wanted)

(kids with Sardar –ji, extensive mosaic work on the walkways)

By the time we had made a half round of the perimeter the skies were getting dark and the lights on the temple were giving it a totally amazing look.

(notice the difference in appearance from daylight to night light)

Jazz took us through the temple providing us a great background of the entire prayer process. Her extensive knowledge of the place was amazing and it made us feel like we did not really know that much about our religion and temples!

Out of the temple gates, we bought steel Punjabi bangles for the kids, for good luck.

Next stop was eating Jalebi’s! You have not eaten real Jalebi unless you have had them fresh. This was a well known Amritsar Jalebi wala who only used Desi Ghee (located very close to the Golden Temple). The Jalebi’s were hot and were melting in the mouth  – felt soo good against my sore throat, plus Jazz did mention that these were actually good for throats, on that I had couple more – for medication purposes offcourse!! Pooja and Neha also got right into eating these Yummy yellow things (according to them).

Next was  a famous Lassi place, made of pure white butter and other things I cannot remember. I am fond of yoghurts and gave it a miss, Nita and Jazz had a glass. Nita’s expression was – yummy!!

For dinner we decided to go back to the hotel, they had a good buffet on the night. Neha and Pooja were again into the Paneer Makhani.

Called it an early night, we were all tired from the early start and long train journey.

Have always loved travelling and will continue to pursue this love. Favourite Travel quotes: “Traveling – it leaves you speechless, then turns you into a storyteller.” – Ibn Battuta “The world is a book, and those who do not travel read only one page.” – Saint Augustine
View all posts by dharmeshkalyan →
This entry was posted in Amritsar, Delhi, India. Bookmark the permalink.