Posted on December 3, 2011 by dharmeshkalyan

Settling back at the hotel – after a long long day plus a bit of jet lag.

Arrived into Hong Kong @ 7:30 am local time, even though we had no customs process and immigration was a breeze, it took us close to 1 hour to get out of the terminal….. being a massive airport , with lots of walking, legs just finally gave up saying ram ram ! 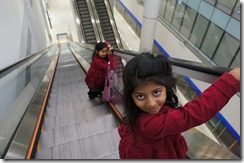 (Long escalators at the airport)
Had to have a short break at the Arrivals area – girls were too tired and complaining of tired legs, coffee break to the rescue, also found out they had free Wifi access!
Following Nita’s friend instructions – we bought the MTR octupus cards (train family pass)
Train from the Airport to Kowloon took only 20 minutes, which also included transfers to hotels from Kowloon station!
Stepping out of the coach into the hotel – COLD Wind!!! was not expecting it to be that cold! Lucky Nita packed lots of skivvies for the girls. 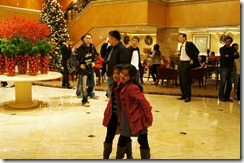 Second problem – Nita had issues with the people smoking and the smog!! which I had no issues with.

Third problem – Kids were really getting cranky now and whinging – kept entertaining themselves by going thru Hong Kong visitors brochures looking for Disney  stuff, which was ok, however they were finding places where they could go for fun – one of the places a Christmas Ice Skating ring, this place we did visit.
Nathan Rd, is a very busy, lots and lots of shop and people everywhere, walked a few blocks and again the legs were giving up on us.
Found an Indian restaurant in the Miramar Towers, which the girls enjoyed quite a bit. Back to basics – Butter Chicken & Garlic Naan!!

Finally got our hotel room at 1pm, we all crashed, except for Pooja, who had slept all along in the flight and had no jetlag at all, she did very well at keeping me awake for most times.

6pm, we are out an about again, took the girls to the Xmas Ice Skating ring, luckily we did not have any major mishaps! 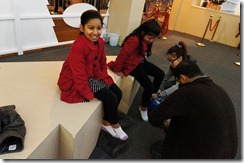 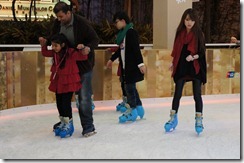 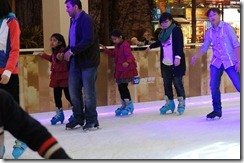 Finding a place to eat (which was edible for us!!) was proving very difficult – there is a food outlet every few meters, however finding one with no “pigs” hanging on the front windows is another matter. After searching long and hard & too tired, we got a cab back to the hotel for some Italian – a good move indeed. 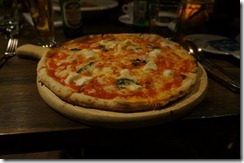 Night was still young, well according to locals, so off we went to the night markets, Neha and Pooja managed to get couple of fake Gucci bags, Nita did what girls do best, buy shoes!! 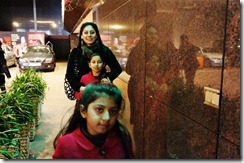 (waiting for Taxi outside hotel to go to Night Markets) 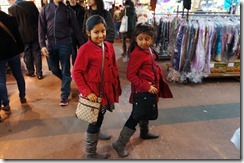 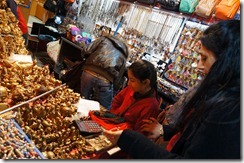 Neha had issues with me bargaining – she noticed I bargained the price of her handbags down, so after the sale, Neha: “Papa you cheated, you paid less money” crazy kids, is there some issue with me spending less money!!!

Got the train back to Tsim Sha Tsui (station near out hotel), and called it a night around 11pm.