Posted on December 7, 2011 by dharmeshkalyan

The big day today, Neha and Pooja have been long waiting for this one – Disneyland!
Alarm went off at 7am, and for the first time, kids jumped out of bed as soon as I tried to wake them up (wonder why).
Quick shower and off to breakie – this was one day where I could blackmail Pooja into finishing her breakfast – Disney was on the line!! Finished off her pancakes with zero fuss … love the feeling when you have the upper hand.

(Neha following our Progress on the MTR, Pooja getting the more excited)

Swtiched trains at Sunny Bay for the Disneyland Resort Line, they were super excited when they saw the disney train, with Mickey Windows, (Neha & Pooja said: Bhavik kaka was right, the train does have Mickey shaped windows!!). It was not just the kids, but Nita and I were also getting excited about getting to Disney, time to become kids again, we were after all going to the happiest place on earth!! 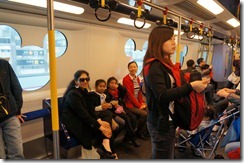 Disney has its own MTR station, now that is cool. The walk from the station to the entrance is not the shortest, it was however building up the excitement with posters of all the fun things to do in the park. We had made a deal with the kids and they repeated it to us on the way to the entrance, “Today Neha and Pooja are the bosses and Papa n Mum will do what we say!!”

(Kids leading the way to Disney – there were after all the bosses for the day!!)

Got to the Disney entrance, only to be told that our travel agent stuffed up the entracne vouchers, this took another 15 minutes to sort out – had to confirm with the travel company, finally at 10:45 we were in the park!! 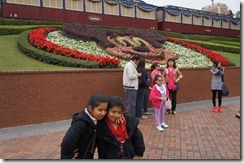 Neha had a park map and was quickly scanning through what we should be doing, I had to make a few suggestions which she accepted and led the way!!
On the way we came across Mickey and Mini Mouse, and also the famous Disney Castle, which Pooja started yelling about from the moment she saw it – “this is the same castle in the movies!”

First up was Tomorrow Land

Luckily the first ride in Tomorrow land had no queue and we were able to get thru quickly, it was not anything scary just a simple spacecraft going round  and round.

Next up, was the Space Rollercoaster, which again luckily had no queue, Neha got scared half way thru the line and backed off, she patiently waited outside for us. Pooja on the other hand is a brave soul. She was really daring and come out laughing!

(waiting for the space coaster)

Next was Fantasy Land and off to the famous Mickey awards show, featuring all famous Disney character in a mega awards ceremony, included, Mickey, Donald Duck, Goofy, Beauty and the Beast, Woody and Gang, Ariel Mermaid and more… 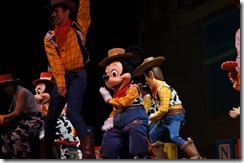 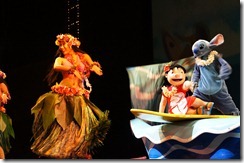 Tea Cup ride was not too be missed, we all jumped into a giant tea cup and spun away

(Neha spinning the cup and Pooja being SPUN!!)

First damage of the day, did promise them some toys, this was the first of many 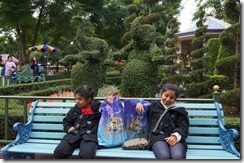 Next ride was the classic merry go around –

It was already approaching 1 pm and kids were getting hungry, few food outlets around fantasy land, however all had the local foods which we did not really appreciate and did not appeal to us, headed back to Main Street, more walking, Pooja was already complaining about the walking she was doing and kept asking for “GODI”. On the way to Main Street, walked thru the famous Disney Castle, 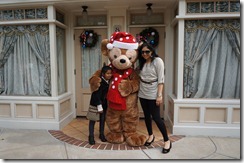 Ate at a bakery, then went on to hire a stroller for Pooja. Luckily Pooja was not with me when hiring the stroller, the maximum weight for the stroller was 15kg, was asked to confirm this then pay $240HKD Deposit… was a bit nervous but am glad I did hire this. Stroller took her weight no problems, however Pooja felt embarrassed, being soo big in a stroller, she kept hiding behind her toys whenever she was sitting in it.

Adventure Land was next – home to Tarzan and Lion King. Must be perfect timing, it was the last Lion King Life Festival show for the day, we walked straight in with no waits, show was very colourful, kids loved watching Simba’s life story being told. 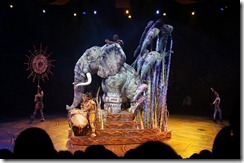 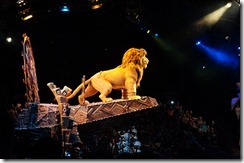 Toy Story Land was long awaited however was the most tiring as well. There were three rides in this land, Slinky, Parachute Jump and the Speed racer ride. Two required us to wait for close to 45 minutes each. All along Pooja and Neha were getting very tired in the long queues. Kids ended up sitting on the corners of the queues and switching lanes when we came around.

Post the first slinky ride, we all come out excited however a bit tired from the long queue, decided to take a short break – ordered Cookies, and Ice Cream for the kids – well thats what I thought I ordered, did not notice that it was a frozen yoghurt stall!! It looked just like Ice Cream however no one liked it, including myself, in the bin!

The next was the speed racer, which was the scariest, both Pooja and Neha came along to this, it was lots of fun

The parachute jump was the last and the longest wait of all, must have been easily close to 1 hour. By the time this finished, it was getting dark and Disney @ nite had come alive. Disney does look prettier at night

Back at main street, kids headed for the Disney store for the promised toys. Decisions were hard, in the end they managed to stay within the allocated limits.

Out of the store, found a nice vantage point to see Mickey and his team come out for the nightly Christmas parade, which was followed by fireworks 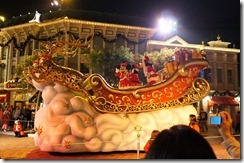 Called it a day & night at Disney and headed back to the MTR. Took some pics at the entrance waterfalls which looked spectacular at night.

Getting back to Tsim Sha Sui station (opp Holiday Inn hotel), we unloaded all the shopping back at the hotel and decided to visit GAYLOAD Indian restaurant again. Again they had the live singers, tonight the guy was coming out with the best Kishore Kumar hits. Ended requesting “Yeh lal rang”, and he sung it very well.
Kids did finish off their meals well, holding off opening the toys did pay dividends!!

Called it a night, the final night for us in Hong Kong, tomorrow would be our last day here.